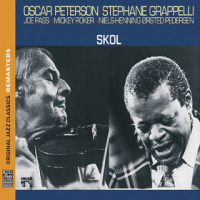 Music impresario Norman Granz (1918-2001) was a cagey so-and-so. When he inaugurated Pablo Records in 1973, he already had a catalog of recordings and an immediate pool of exceptional performers who also happened to be under his management (often making his acquaintance through Granz's Jazz at the Philharmonic program). With this combination of fortunes, Granz was able to release some 350 recordings in 15 years, before he sold his company to Fantasy Records in 1987.

We are amid the 40th anniversary of the founding of Pablo Records and the Concord Music Group (current owner of the catalog) is remastering and releasing plum picks from the catalog. We have already seen John Coltrane: Afro Blue Impressions (1963/2013), Sarah Vaughan: Sophisticated Lady: The Duke Ellington Songbook (2013) both supplemented by improved programming, and Zoot Sims And The Gershwin Brothers (1975/2013), Art Tatum: Solo Masterpieces, Volume 1 (1975/2013), and Dizzy's Big 4 (1975/2013).

In 1979, with his label connections with pianist Oscar Peterson, guitarist Joe Pass, bassist Niels-Henning Orsted Pedersen and drummer Mickey Roker firmly cemented, Granz was in a perfect position to take advantage of recording this quartet's support of violinist Stephane Grappelli July 6, 1979 at Copenhagen's Tivoli Gardens. Grappelli, veteran of guitarist Django Reinhardt's Quintette du Hot Club de France, was to meet another guitar titan in Pass for what would be a memorable show. The concert had two parts, the first recorded with Grappelli, Pass and Pedersen, released as Stephane Grappelli/Joe Pass/Niels-Henning Orsted Pedersen: Tivoli Gardens (Pablo, 1979). The second part of the show added Peterson and Roker, eventually becoming the present Skol.

The original six tunes are supplemented with previously unreleased performances of Honeysuckle Rose," "Solitude" and "I Got Rhythm" making is overall re-release quite attractive. The performance begins with an extended suite version of Django Reinhardt's "Nauges" introduced first by a solo performance by Pass, followed by Pass supporting Grappelli and then a solo performance by Peterson. The entire band joins in the coda, reminding an appreciative audience why they came to this particular show on a balmy Summer night.

Pablo records ensured that the late 1970s was a time flush with excellent mainstream jazz. Granz provided so recordings of exceptional musicians in fine performance that it was easy to take for granted at the time. The alchemy between Grappelli, Peterson and Pass on this recording is something extraordinary and the shine bears no tarnish nearly 40 years later. Grappelli's earth-bound fiddle plays a fine foil to Peterson's and Pass' Art Tatum-like virtuosity. Pedersen and Roker's timekeeping was precise. Concord Music Group missed a grand chance to bring Skol and Tivoli Gardens together under the same banner as they did with Sarah Vaughan's two Ellington discs, making up Sophisticated Lady: The Duke Ellington Songbook mentioned above. That would have made this release perfect.

Tracks: Nauges; How About You?; Someone To Watch Over Me; Makin' Whoopee; That's All; Skol Blues; Honeysuckle Rose; Solitude; I Got Rhythm.