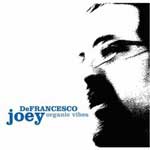 Rooted in Philadelphia, the hometown of so many of his Hammond B-3 predecessors, Joey DeFrancesco knows soul-jazz organ grooves. And he seems to have studied their lessons well, as he's strung together the Down Beat Critics' Poll "Best Hammond B-3 player awards the past four years running.

DeFrancesco grooves these Organic Vibes in the serious jazz company of composer and vibraphone master Bobby Hutcherson throughout—as well as saxophonist George Coleman, a vital link in the Coltrane through Garrett saxophone lineage of Miles Davis, who graces with elegance the standards "Speak Low and "Somewhere in the Night.

DeFrancesco also continues to groove in the spirit of his friend, mentor and fellow Philly homeboy Jimmy Smith. Last year's Legacy, his tribute to/with Smith, ended up being Smith's last studio recording before his passing in February. DeFrancesco plays Jimmy Smith's 1959 Hammond B-3 organ on Organic Vibes, according to the credits.

Horns sit out of the nine-minute cruise through the classic "I Thought About You, which shines its solo spotlight completely on vibes and organ. Hutcherson later lifts the shades on another classic with his unaccompanied, lovingly rendered introduction to "My Foolish Heart, then simply keeps playing as the members of the rhythm section, including DeFrancesco, delicately assume their positions behind him... and stay in the background, keeping it a showpiece for this legendary vibes player. "I've always loved the sound of organ and vibes together, DeFrancesco says. "They're very similar but that combination really hasn't been done a lot.

Coleman's saxophone sound makes "Somewhere in the Night sound like classic bebop—meaty, sharp and robust—as organ nicely sets the table for solos on saxophone, vibes and guitar. Coleman kicks off "Speak Low in an extremely sharp style and tempo that suggests Davis' mercurial "free bop take (a mixture of bebop and free jazz) on this same material. DeFrancesco's solo sounds inspired by Coleman, and whips this warhorse to its finish.

This solid date—a truly old-school bebop jam—does DeFrancesco's legacy, and that of his forefathers from Philly, proud.

The Tackle; Little B's Poem; I Thought About You; Somewhere in the Night; Down the Hatch; Speak Low; JeNeane's Dream; My Foolish Heart; Colleen.