By Hrayr Attarian
December 30, 2017
Sign in to view read count 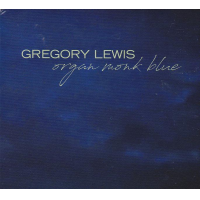 Pianist Thelonious Monk is organist Gregory Lewis' primary source of inspiration, so much so that Lewis has adopted the stage name Organ Monk. His first two releases were mostly homages to Monk and replete with the latter's originals. After forays into other material, including the poignant The Breathe Suite (Self Produced, 2017) about recent racial injustices that unnecessarily claimed young lives, Lewis returns to the "genius of modern music" with Organ Monk Blue.

On the current album Lewis is in an intimate trio setting with guitarist Marc Ribot and drummer Jeremy "Bean" Clemons. The three musicians exhibit delightful camaraderie and satisfying synergy. For example, the band intriguingly reconstructs "Blue Sphere" infusing it with hefty dose of bluesy spontaneity. Ribot and Lewis' eerie call and response exchanges over Clemons' sharp percussive bursts set an otherworldly mood. As Ribot's sharp, piercing phrases bounce off Lewis' dense and angular chords and Clemons' kit roars and rumbles in the backdrop the tune becomes simultaneously elemental and complex.

Lewis has a soulful style and a blistering tone both of which are demonstrated on such gems as "Misterioso." He embellishes the main theme with passion and gusto as his gritty solo simmers and glows with indigo hues. Ribot takes his turn in the spotlight, over lush organ and drum refrains, letting loose a sinewy and captivating improvisation.

Lewis demonstrates his virtuosity on, among others, the riotous "Raise Four." His deceptively facile and fluid performance is full of breathtakingly fast and daring lines Clemons' swaggering beats and Ribot's full bodied guitar sounds bring in hints of early rock and roll to the piece.

Organ Monk Blue is a high energy and utterly enjoyable recording. It is a novel albeit not necessarily innovative, reinterpretation of Monk's work. It is, nevertheless, a welcome addition to Lewis' evolving and impressive discography.