By GENO THACKARA
January 18, 2018
Sign in to view read count 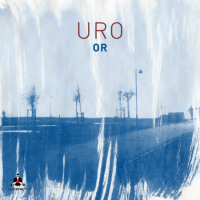 It's always nice to discover a meeting of new or unfamiliar bedfellows in the music world. However figuratively or geographically removed some things may seem to be—such as Scandinavia's fjords and the American heartland, let's just say for instance—you can probably count on a crew of good and willing players to find some common ground. Okay, old-world European folk and Americana really aren't all that different when you think about it, but they don't seem to rub shoulders as often as they could either. To anyone who's ever wondered what would happen if Jerry Douglas met Terje Rypdal (and more likely anyone who's never even thought of it), OR provides an answer that's picturesque and sometimes breathtaking.

One can't help wondering why they chose a band name and title practically designed to be invisible in the digital world, but that's the basic outlook URO displays in the music as well. Even with a triple-guitar frontline, this is a long way from anything resembling an axe-fest. With a judicious division of rhythm lines and melody parts, the string-pickers leave themselves plenty of open air even while locking together like jigsaw pieces. Any electric distortion is lightly-toned enough to complement the loping folk grooves, while some recurring dobro gives a gutsy shot of down-home twang.

From easy sweeping strains to jaunty low-country hooks and back, it's a lush ride through landscapes idyllic and green. The backing guests (on saxophone and understated wordless vocals) keep the same degree of restraint in the couple spots they appear. The players would all rather work as an understated whole rather than featuring flashy solos or fireworks, and URO's lovely pastoral vibe is much stronger for it. It makes for a listen that requires patient attention and rewards it beautifully.