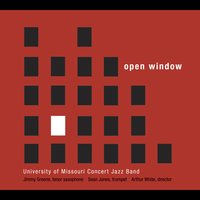 Greene and Jones are out front again (as is Copeland's arco bass) on John Clayton's frolicsome "Last Stop" (also the last stop on the album), Jones on "Great Plains," "Northwest Plaza" and the lovely Johnny Burke / Jimmy van Heusen standard "It Could Happen to You" (smartly introduced by Oliviera and pianist Lily Tan and encompassing likeable solos as well by tenor Michael Neu and trombonist Andrew Meyer). Neu arranged that one, as he did "Frim Fram Sauce." Trombonist Andrew Brown arranged "Berkeley Square."

If Open Window is a splendid example of blue chip college-level big-band jazz enhanced by renowned guest artists (as it surely is), the same can be said for Flying Colors, a hard-swinging session on which members of the band again play prominent roles as composers, arrangers and soloists. This time around, White wrote two charming numbers ("Sweet Baby Sam," "Megan's Dance") while Neu contributed the easygoing "Coalescence," trombonist Ryan Adamsons "Lakewood and Wayne" and "Ballad of Daniella IV" (more blues than ballad), pianist Ben Colagiovanni the effervescent "Closing Time." Mainieri wrote the album's titular number and closing theme, to which he and White (on tenor) append nimble solos. Rounding out the program are Debora Gurgel's carefree "Das Americas" and Sam Rivers' graceful "Beatrice."