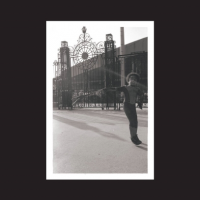 Irreversible Entanglements is the sort of band that gives poetry-and-jazz a good name. The third full-length album from the Philadelphia/NY/DC collective fronted by poet Camae Ayewa aka Moor Mother ploughs the same rich furrow as before: groove friendly semi-free jazz which dissects diasporic Black history and lays out future possibilities.

The band's bloodline stretches back to such landmark releases as New York Art Quartet & Imamu Amiri Baraka (ESP, 1965) and Jayne Cortez's Celebrations And Solitudes (Strata-East, 1974)—jazz and spoken-word albums which, shamefully for America, were fifty years and more ago addressing essentially the same issues as Open The Gates does in 2021-22.

What distinguishes Irreversible Entanglements' work from that of some of its predecessors, though most assuredly not from that of Jayne Cortez, is the quality of the poetry. While some observers have applied the description agit-jazz to the group, the well-intentioned term actually does it an injustice. Agit-jazz suggests the sort of simplistic sloganeering which one might find on placards and subway walls, and which becomes increasingly banal with every iteration. Ayewa's poetry can also be traced back to subway walls, the ones on which hipsters and beats wrote "Bird lives" in the weeks and months following Charlie Parker's passing in 1955. But like that defiant epigram, Ayewa's words are true poetry, not sloganeering, and their message, though crystal clear, encourages an imaginative rather than a Pavlovian response. That is why poetry endures and sloganeering does not, and why Irreversible Entanglements' work resonates.

Irreversible Entanglements' aesthetic has other things going for it, too, starting with the incantatory nature of the music, which at times approximates that of Maghrebi trance forms. (Is this intended? Does it have anything to do with the name Moor Mother?) The pianoless quartet which works with Ayewa—and which is given plenty of purely instrumental space on the seventy-three minute album—has in saxophonist Keir Neuringer, trumpeter Aquiles Navarro, bassist Luke Stewart and drummer Tcheser Holmes not only strong colourists and soloists but, four years on from its first release, a tightly bonded unit. If any one musician can be called the fulcrum of the group, it is Stewart, whose intense bedrock of sound at times resembles that of an entire gimbri section in a gnawa ensemble in the Atlas mountains. The voicings and declamatory profile of the horns, meanwhile, sometimes suggests that of the rhaita section of the Master Musicians of Joujouka in the Rif Mountains. Musical spell-casting does not get more powerful than this. There is also a lot of positivity around; and while the message is a Black one, it does not feel exclusionary to a non-Black listener.

This time out, the band has added synths and electronics to the recipe, but these are used sparingly and the sound remains essentially acoustic, raw and in-the-moment. Remarkably, Open The Gates was recorded, beautifully, in just one day in January 2021, though the mixing was more leisurely. The result is a live performance which is enhanced by empathetic post-production. It is a banger alright.