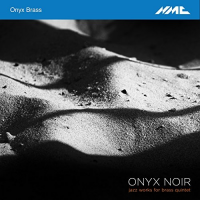 Jazz has often been described as America's classical music, so hearing a British classical group tackling jazz is bound to intrigue. Even more so when it's a brass quintet and we recognise the key role of brass bands in the birth of jazz.

Onyx Brass trombonist Amos Miller was at the Banff International Jazz Summer School in 1994. One of the tutors taking part was Kenny Wheeler. Move ahead to 2012 and Miller phoned Wheeler asking him to compose something for Onyx Brass. Only two years before he sadly passed away, the great trumpet and flugelhorn player responded with typical grace. He reworked two of his earlier tunes into the piece "1 For 5" which delivers a mix of sultry swing and romantic waltzes. Nino Rota's soundtracks come to mind here, with a sense of la dolce vita being lived up.

This is jazz played by classical musicians, so the result is more stately than subversive. It might be very English in essence, but American roots music is noted among the twelve composers who contribute original pieces. Devoid of any percussion, the quintet relies on its own sense of internal rhythm. Nowhere more so than opening cut "Stomper," which sashays in with a bright pulsation, like a Mardi Gras wedding dance. "Holy Chalcedony," by veteran bassist Laurence Cottle, is solemn and soulful, yet laced with Southern gothic. "Firebox" pays homage to steam trains, from its chuffing puffing intro that rolls into "Sunny South Sam" and "The Federal Express," nodding at Britain's heritage of colliery brass bands en route.

Onyx Brass celebrated its twenty-fifth anniversary with this album, and despite forging a repute for chamber music, the five-piece knows how to transform. "The Mighty Pencil" sees them throw the party open to improv, with each player chirping together. "For Rosie" is tinged with quiet nostalgia and "Imaginary Dance" shows balletic grace amid its call and response boomings.

Jason Rebello offers "Inevitable Outcome," a piece inspired by life's pathways that treads cautiously before the strident chords flow. "Symbols At Your Door" by tuba maestro David Powell quite reasonably has a warming tuba solo, with a touch of tango and hymnal motifs. The title track sees film music arranger Guy Barker take his movie know-how and site it on the corner of 73rd Avenue in a trench coat. The tuba suggests a brooding private detective, as shifty trombones lurk in the shadows.

David Lefeber's recording places each number in the present with a vivid production, linking up many facets of jazz composition. Onyx Noir is a brave and often brilliant collection of works.