Home » Jazz Articles » Sonny Rollins: On Impulse / There Will Never Be Another You

Sonny Rollins: On Impulse / There Will Never Be Another You 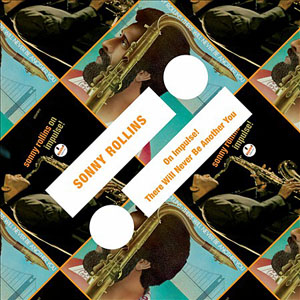 What could be better than an album by Sonny Rollins? Two albums by Sonny Rollins, especially a reissue of two treasured Impulse! releases—On Impulse! (1965) and There Will Never Be Another You (1978)—in their entirety, on a single 75-minute CD. That's a lot of satisfying tenor time with the Saxophone Colossus.

On the heels of his 80th birthday, there's not a lot that can be added to the musical criticism of Rollins. More often than not his press is more lionization than reproach, and with good reason. His huge sound, consistently melodic and accessible, combined with his supreme musicianship stand astride the jazz world: a god among mortals.

The original Rudy Van Gelder recordings have been remastered at Eastside Mastering Studios in Berlin, and they've done a bang-up job. On Impulse! is a studio recording, and fares better than some other recordings made in that venue. Rollins' horn is big, centered in the middle of the stage, and almost etched forward in the mix. The flanking piano and drums sound natural and spacious.

Sonically, however, the real treat is There Will Never Be Another You. Recorded live in New York City's Museum of Modern Art in 1965, but mysteriously not released until 1978, the record is a treasure. The room is audible, especially when Rollins moves around and away from the mic. He can be heard walking to the back of the stage, his horn receding as he goes, and then reemerging as he plays his way back into position. Some critics have been lukewarm to this record because the horn is captured unevenly, but that is precisely its charm. It's a live recording, and Rollins can be heard in motion as well as in sound.

Of course, the performances on both albums are first-rate. Pianists Ray Bryant and Tommy Flanagan perfectly complement Rollins' playing whether they're comping or soloing. Drummers Mickey Roker and Billy Higgins are thunderous; and bassist Bob Cranshaw (who still plays with Rollins today) drives the whole thing endlessly forward. Rollins is, as expected, impeccable.

Excellently remastered and containing two complete albums on a single CD, this stands as a reminder of how long Rollins has been playing, how great he was and remains to this day.

Title: On Impulse / There Will Never Be Another You | Year Released: 2011 | Record Label: Impulse!