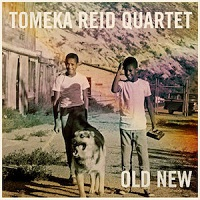 Tomeka Reid cut her teeth in Chicago, recording with Anthony Braxton, Roscoe Mitchell and Nicole Mitchell, but the cellist's 2016 move to New York seems to have fired her creative juices even more. The prolific Reid has appeared on nearly twenty recordings in that time, notably including the Art Ensemble Of Chicago's We Are On The Edge (Pi Recordings, 2019), and also touring with the group in celebration of its fiftieth anniversary. Given the demands on Reid's time, it is little wonder it took five years to follow up her impressive debut as leader, Tomeka Reid Quartet (Thirsty Ear, 2015). It has, however, been well worth the wait.

As the title suggests, Old New is both backward and forward-looking at the same time, typified by the bracingly contemporary take on the old standard "Wabash Blues," which sees feisty solos, teetering on the edge of dissonance, by Reid and guitarist Mary Halvorson. Though the guitarist's pedal-influenced, electric soundworld contrasts sharply with the leader's more broadly acoustic approach, their chemistry is pronounced, navigating the heads in unison—for the most part—and hungrily feeding off each other's improvisational impulses. Double bassist Jason Roebke and drummer Tomas Fujiwara need to be on their toes, switching in a flash between steadily driving rhythms and on-the-fly creativity.

Helter-skelter charge and elegant choreography go hand-in-hand on the title track, although the joins between composed and improvised parts are tantalizingly blurry. Here, Roebke and Fujiwara's unrelenting churn allows space for Reid and Halvorson's open-ended dialogue. A funky, quasi second-line groove bookends tearaway cello and guitar dynamics on "Nikki's Bop." Fidgety abstraction characterizes the early exchanges on "Aug 6," the flailing suddenly steadied by a powerhouse bass groove and cantering drums which launch Halvorson and Reid on parallel flights where lead and accompanying roles are fluid.

The placid, processional gait of "Ballad" underpins Halvorson's determinedly spiky guitar, and nerve-shredding ascending arco from Reid. Even on the straight-ahead bop of "Sadie," powered by walking bass and Fujiwara's lightly skipping brushes, Halvorson's solo stands out from fine efforts by Roebke and Reid for its uncompromisingly avant-garde bent. A modern original, it is perhaps not surprising that Halvorson would eventually cross paths with Bill Frisell, resulting in the excellent The Maid with The Flaxen Hair (Tzadik, 2018).

Creaking strings and restless percussive stirrings cede way to a firm groove on "Edelin," the new impetus unleashing a fuzzy, pedal-skewed guitar storm, and strong yet lyrical bowing from the leader. The episodic "Peripatetic," which moves between dark, brooding textures and urgent rhythms spiced with zesty improvisation, is not a million miles away from 1970s King Crimson. Fine arpeggio, earthy bass and sweet cello are the prelude to shimmering guitar psychedelia on "RN," a hypnotic affair which somehow conspires to be both retro and progressive—much like the whole album.