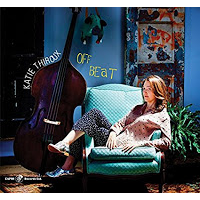 Katie Thiroux has studied with jazz vocalist Tierney Sutton and bassist John Clayton, and the bassist/vocalist was awarded a scholarship to the Berklee, later teaching at the esteemed College of Music. Her resume is as impressive as it gets, but this is not a woman who rests on her laurels. Her instruments are her calling cards. Off Beat is her sophomore album and is quite impressive. The core lineup of pianist Justin Kauflin and drummer Matt Witek is augmented by the brilliant clarinetist/tenor saxophonist Ken Peplowski, as well as saxophonist Roger Neumann. The ten-song program is filled with familiar and not-so-familiar songs, and mixes vocal tunes with instrumentals. The results are glorious. The title cut opens the program and sets the stage; the old June Christy tune is given a finger-snapping reading that sees Peplowski, Kauflin and Witek backing Thiroux as she sings, "just 'cause I'm different doesn't mean I'm wrong."

On Benny Carter's "When Lights Are Low," Thiroux owns the song. Her phrasing has just the right amount of simultaneous tenderness and swing, while Kauflin's solo is a perfect foil. "Why Did I Choose You?," from the 1946 film The Yearling, is a tender ballad. The Thiroux-penned "Slow Dance With Me" is a medium-tempo instrumental, with the band invited to stretch out; everyone shines. An instrumental take on Frank Loesser's "Brotherhood Of Man" is followed by Thiroux scatting on "Ray's Idea," also featuring a delicious clarinet solo. On Leiber and Stoller's "Some Cats Know," Peplowski blows a smoky tenor behind Thiroux's snazzy, lazy vocal ("some cats know how to make the honey flow but if a cat don't know a cat don't know").

"When the Wind Was Green," a Frank Sinatra vehicle with the lyrics "When the wind was red like a summer wine, when the wind was red like your lips on mine, it caressed my face and it tossed my hair, you were there," is given a hip reading that does the original proud. Again, Peplowski's clarinet is prominent. Roger Neumann trades tenor lines with Peplowski on Duke Ellington's classic and classy "Happy Reunion," under which Thiroux and Witek are joined by Kauflin's perfect accompaniment.

Closing with "Willow Weep For Me," Thiroux plays bass and sings, unaccompanied. Her bass work, in particular, is impressive. A highly recommended disc by a rising star in the jazz firmament.

Off Beat; When Lights Are Low; Why Did I Choose You?; Slow Dance With Me; Brotherhood Of Man; Ray's Idea; Some Cats Know; When The Wind Was Green; Happy Reunion; Willow Weep For Me.