By Edward Blanco
August 9, 2017
Sign in to view read count 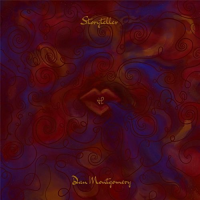 Young bassist Dan Montgomery makes a splashy entrance onto the landscape of recorded jazz with Storyteller, a brash, audacious offering of classic modern jazz featuring nine original compositions performed by a core quintet of fellow classmates from the University of Miami's (UM) Frost School of Music. A bassist/vocalist and educator from Rochester, NY, Montgomery is currently a professor of jazz bass at the Community Arts Program in Miami, FL, was a finalist for the Thelonious Monk Institute; a semi-finalist for the 2017 International Society of Bassists (ISB); and also includes membership in the Black Cat Bar & Grill Restaurant's house band, in San Francisco, CA, to his resume.

Montgomery called on several musicians he had met while studying at UM to document his first album, among them: alto saxophonist Sam Priven; tenor saxophonist Neil Carson; pianist Jake Shapiro; and drummer Evan Hyde . Trombonist of note Chad Bernstein, who has become one of South Florida's premier Latin jazz artists, appears on the opening "Type A," while UM professor of jazz guitar, Tim Jago, graces the album on "Home."

As the title of the piece indicates, "Type A" is a hard-driving, fast and turbulent modern jazz burner; much like type A personalities who are competitive, goal-driven and easily aroused, angered or moved, this piece of music uniquely drives that point across though to the second track, "Fast Approaching Midnight," which falls in with much of the same texture. "Sentimental" is a departure from most of the set in that it is brief, more subdued, slow and down-tempo.

In stark contrast, "Laila" beckons as one of the more memorable pieces of the session and the first to offer sparkling solo moments from Montgomery and Hyde. "Home," another fine Montgomery composition, is one of those bright moments where the band plays gently though engagingly. Other exceptional tracks include "Lisboa," "Soft in the Sun," the energetic "Relapse" and humbling finale, "Light."

Montgomery has established a firm foundation from which to launch his emergence as a jazz bassist, writing the beginning chapter of a story that has yet to unfold. Storyteller provides the bassist with an exceptional opportunity to showcase his more than appreciable talents as a composer as well as his skills as a musician, as his tale continues to be revealed.