By Bruce Lindsay
November 2, 2012
Sign in to view read count 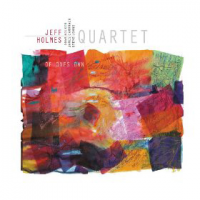 It's not the job of liner notes to critically appraise the recording for which they were written. Liner notes are supposed to be laudatory, occasionally hagiographic, but they're never meant to critique. That's the job of the review. Reviews don't make good liner notes and vice versa. Exceptions prove rules, however. So congratulations must go to Arturo O'Farrill, because his excellent liner notes for the debut album from pianist Jeff Holmes' Quartet—the equally excellent Of One's Own—could readily serve as a review.

When O'Farrill, a noted composer and musician, writes that "This is a delightful record... funny, quirky, personal jazz," which "feels like it is a gathering of friends" he is, to use an old cliché, telling it like it is. Of One's Own is a joy, an album filled with funny, beautiful, thoughtful and upbeat tunes.

This may be the quartet's recording debut, but the band members have many years experience. Holmes, who wrote all of the original tunes on the record, is Professor of music at the University of Massachusetts Amherst and a former member of Vince Giordano's Nighthawks. Bassist James Cammack played with Ahmad Jamal for 30 years, Steve Johns was Billy Taylor's first-choice drummer and saxophonist Adam Kolker's resumé includes work with Ray Barretto and Maria Schneider.

Holmes' own compositions range from the graceful and flowing "The Senses Delight," to the slinky Latin groove of "One For C.J."-underpinned by Cammack's terrific bass line- and the angular gospel inflections of "Macaroons." "Rose On Driftwood" is a meditative, languid tune that stays below the radar initially but repays repeated listening by unfolding a wealth of musical ideas.

The band brings a freshness to a couple of classics. Holmes' version of Nat Simon's "Poinciana"-which O'Farrill and Jamal have both recorded-is slow and romantic. Kolker plays the melody on bass clarinet: a surprising choice perhaps, but an effective one as the instrument's rich, warm tone adds a touch of melancholy. The album closes with Rodgers and Hammerstein's "So Long, Farewell." It's a suitably valedictory title. Holmes turns the tune into a straight-ahead swinger with Kolker's tenor sax and Johns' drumming crackling with energy. So long, the band seems to say, but we'll be back soon.

Macaroons; Labour Day; Poinciana; The Senses Delight; One For C.J.; Waltz #3; Of One's Own; Rose On Driftwood; So Long, Farewell.