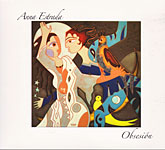 When Elis Regina died, most Brazilians thought that the vacuum created by her loss could not be filled. Then along came Rosa Passos and Anna Estrada. The two vocalists did not jostle for a position in the vacant slot that Regina left behind, however both have filled it individually with the extraordinary breadth and scope of their talent. Passos stays within the Brazilian ethos more often than not, and if Obsesion is anything to go by, then Estrada appears to be more adventurous— embracing the whole Latin American and Afro-Brazilian ethos. However, this is where all further comparisons should end.

Estrada possess a unique voice with a dynamic range that stretches two-and-a-half octaves. She is wonderfully expressive and more likely to inhabit the characters in her songs than any Brazilian artist does today. On Obsesion she has chosen what may be argued to be a rather narrow spectrum of song—a look at "love" in several forms. Actually, it is the other way around— the record proffers a staggering array of moods, sensibilities and tableaus, provoking intense feelings.

It is remarkable that Estrada sings in English, Spanish and Portuguese. By itself, this may be no great achievement, but to be mindful of each idiosyncrasy, of every rhythmic form and idiom from such disparate musical cultures represents quite a feat. For instance, in Spanish she turns the old favorite, "La Mentira," (The Lie) into a ravishing new standard. "Nature Boy," sung in English, is imbued with a wondrous spirit that few, and only those with the soul of deep song, can bring forth from the gut.

"Llorona" is one of the blackest and most shockingly brilliant recreations of the Medea myth. Only a singer who can cast the spell of duende from the darkest part of the soul could have pulled this song off. "Soledad" captures the wistful nature of solitude in much the same away as Al Hibbler once did with the Duke Ellington Orchestra on "Solitude." The other English song on the record, Burt Bacharach and Hal David's "Always Something There To Remind Me," harks back to some of the most beautiful son forms in Cuba.

The Brazilian fare is remarkable for the range of moods conveyed by the songs. Vinicius De Moraes "Carta Ao Tom 74" probably stays truest to the manner in which the song was written, but immediately recalls the heyday of Brazilian vocalastics under Elis Regina. The chorinho, "Upa Neguinho" is refreshing and brings "the little black girl" to life yet again. "Adeus America" is an old '50s boogie-woogie written at the height of Brazil's fascination with American song. Estrada fills the room with her presence when she sways into this song and making it echo with saudade.

Two other noteworthy contributions to the CD include Michelle Goerlitz's percussion throughout and of Damien Masterson's magnificent harmonica, especially on "Llorona."