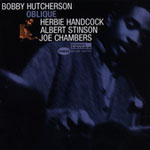 A welcome and worthwhile addition to Blue Note's Rudy Van Gelder remaster series, Oblique is one of only two quartet albums Bobby Hutcherson recorded for the label, and it's the most enduring by a long mile. Two tracks in particular, "Oblique" and "Bi-Sectional," both by genius drummer/composer Joe Chambers, are bona fide, five star hall-of-fame greats.

Hutcherson's first quartet album was Happenings, recorded in '66. Oblique followed in '67. The lineup on both occasions was the same except for the bassist: Bob Cranshaw was replaced on the second album by Albert Stinson.

What gives Oblique the edge over its predecessor is its well-rounded compositional base. While all but one track on the first album were written by Hutcherson, here his three attractive but relatively conventional tunes sit alongside altogether more remarkable ones by Herbie Hancock ("Theme From Blow-Up") and Chambers. The result is a satisfying and slow-burning progression from in-the-groove hard bop romps through Chambers' daring symphonies-in-miniature, sonic and rhythmic tone poems.

Hutcherson's samba-flavoured ballad "'Til Then" and Baroque-informed "My Joe" each include on-fire vibes and piano solos—Hutcherson and Hancock both improvise at the top of their passionate trees throughout the album—and "My Joe" is further distinguished by a brief but colossal solo from Stinson (tragically dead of an overdose two years later).

Things get even better with Hancock's iconic "Theme From Blow-Up," here given the only straight-ahead jazz reading the pianist ever recorded, and start seriously hitting greatness with Chambers' closing "Oblique" and "Bi-Sectional." Hutcherson and Chambers contribute soaring, sweeping solos of towering architectural form to "Oblique," while "Bi-Sectional" is an equally daring and well executed exercise in collective improvisation. At 5:04 it's one of the shortest tracks on the album, but it's the one which goes the furthest and arguably says the most.

Probably because ill-health forced producer Alfred Lion to retire from Blue Note later in '67, Oblique had to wait until '80 to see its first release, and it remains less widely celebrated than its enjoyable, but by no means as exciting predecessor. This beautifully remastered edition should help enhance its reputation.

'Til Then; My Joy; Theme From Blow-Up; Subtle Neptune; Oblique; Bi-Sectional.