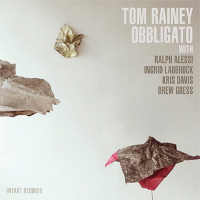 Tom Rainey has been a fixture in New York's Downtown scene since the early '90s. The stalwart drummer's current efforts have found him expanding his purview, collaborating with a new generation of creative improvisers. Working on original material with young Brooklyn-based artists like Ingrid Laubrock and Mary Halvorson, Rainey continues experiments in form and structure that he originally helped pioneer with his peers, including Tim Berne, Andy Laster and Tom Varner.

Obbligato is Rainey's second release for Intakt Records as a leader and a notable first for the intrepid percussionist since it features Great American Songbook material instead of rarefied originals, intriguingly reinterpreted by a multi-generational group of artists. Trumpeter Ralph Alessi and bassist Drew Gress are fellow Downtown scene veterans, while saxophonist Laubrock and pianist Kris Davis are prodigiously talented members of a younger generation. Using well-known standards as common ground, the five-piece ensemble embraces the harmonic foundations of familiar songs with a concerted focus on melodic invention. Together they reconfigure traditional tunes as impressionistic sketches, treating timeless themes as rubato obbligatos underpinned by supple group interplay.

Brimming with luminous passages of euphonious call-and-response and bold collectivism, the session unveils a multiplicity of approaches towards time-honored material. Two versions of "Just in Time" bookend the date, opening and closing the album with pulse-quickening excitement, as the quintet careens through the changes with free-spirited abandon. Renditions like Dave Brubeck's "In Your Own Sweet Way" offer a more sober experience; a relaxed gait accentuates the warmth and lyricism of the number's core motif, a sonorous line beautifully extrapolated by Alessi and Laubrock in a series of breathy exchanges. Even warhorses like "Prelude to a Kiss" and "You Don't Know What Love Is" are recast anew; the former unfolds as a phantasmagoric abstraction, the latter as a cinematic tone poem fortified by rhapsodic embellishments towards the coda.

Greater than the sum of its parts, the group's congenial rapport is emblematic of attentive listening and democratic interplay. Alessi's oblique lyricism, Laubrock's quixotic phrasing, Davis' pointed accents and Gress' pliant ruminations all work in collusion with the leader's wide-ranging dynamics. Though unconstrained by formal concerns, the musicians always maintain some key aspects of the underlying structure of each piece, be it melody, harmony or rhythm. Such awareness of the tradition enriches the depth of their interpretations, making Obbligato one of the most persuasive modern recordings of established standards in some time.

Just in Time; In Your Own Sweet Way; Long Ago and Far Away; Reflections; Secret Love; Prelude to a Kiss; Yesterdays; If I Should Lose You; You Don't Know What Love Is; Just in Time Again.