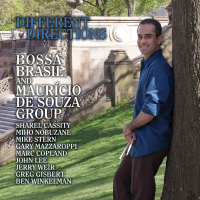 Brazilian music and jazz intermingle with other touches to produce Mauricio de Souza's Different Directions. There are a lot of different exposés, particularly of Brazilian rhythmic styles interpreted by a wonderful collection of artists contributing their artistic talents. Bossa Brazil lends itself more towards Brazilian music while the Mauricio de Souza group will have more traditional jazz leanings. As a whole, it feels like a natural organic whole. The project includes a combination of classics as well as original compositions.

The opening "Ponteio" by Edu Lobo opens everything with a fresh and engaging vibe led by Jerry Weir on vibraphone. The basic clave for the baião, a rhythm from the Northeast of Brazil, is in its bass line. De Souza then eases into a smooth bossa nova with Jobim's "Vivo Sonhando" before bringing things further down with "Prelude," a slow bossa nova.

The title track could be a parallel to the previous project, Here, There.... (Pulsa Music, 2010) but perhaps it is also a reflection of our time where people are constantly shifting their goals, roles, and personal connections despite carrying a slew of tech devices supposedly to simplify life. For de Souza, it's "a musical reflection of frustrated love experiences." The melancholic mood permeates throughout the contemplative piece in a minor key. The major key on the bridge reflecting potential hope is too brief to really resonate. It's almost by coincidence that the true sign of hope comes in the following Dizzy Gillespie classic "Con Alma" played in a 5/4 pattern. This tune is a dedication to de Souza's mentor and friend, Joe Morello.

Particular mention has to made of New York-based saxophonist Sharel Cassity who really commands her place both as a musician and a composer. De Souza started playing with her in early 2012. Within a short time she has contributed substantially to the group's direction. Cassity shows a glimpse into her compositions with her original "The Acceptance of Resolve," a jazz waltz with a fitting counter melody played here by Greg Gisbert. The saxophonist is followed by Gisbert on flugelhorn and Miho Nobuzane on piano. All solos sound very lyrical and flow neatly one into the other without drifting too far from the main melodic line in the ideas.

The start of "Lá Vamos Nós" has a distinct flamenco undertone similar to the opening line of Rodrigo's "Concierto de Aranjuez." De Souza explains that he tried to combine this type of rhythmic music with one of the traditional Brazilian rhythmic styles, the maracatú. For the latter, he used a basic floor tom drum together with the snare while maintaining a jazz flavor to the whole.

For some pieces, de Souza had particular musicians in mind for the specific arrangements. "Shasha," was created with Sharel Cassity's versatility and instrumentation in mind. Most of the time, Webster and Kaper's "Invitation" would have the melody played on a horn or piano but in this instance de Souza had Mike Stern in mind to lead with Gary Mazzaroppi starting off with a solid 12/8 clave.

The album closes with Chick Corea's jazz burning "Straight Up and Down" to end on a high note. Mauricio de Souza showcases the rich variety of how Brazilian and jazz music come together beyond bossa nova.