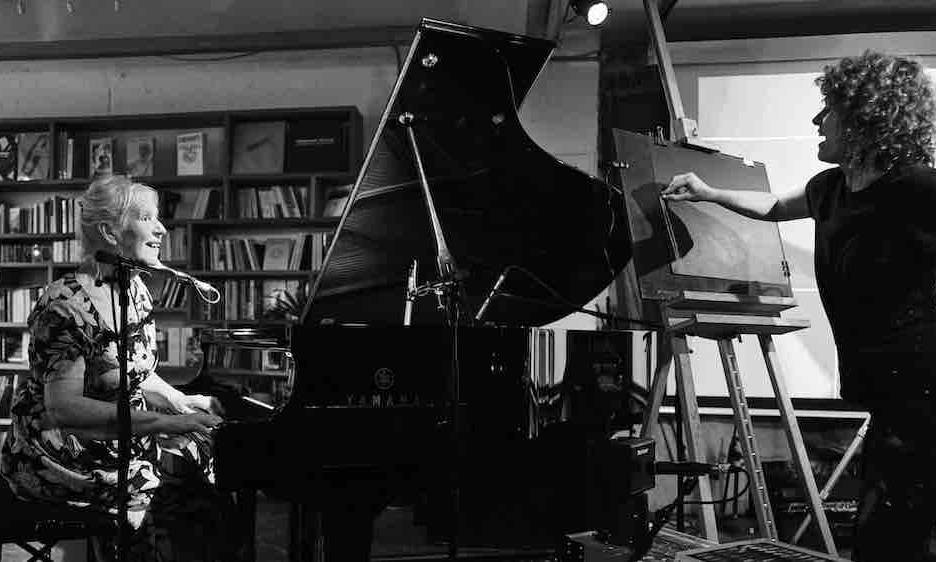 The move to the larger Cafe Oto was an indication of the ever-increasing attention that the Noisy Women had been attracting since their debut concert in January 2022.

The title given to this Cafe Oto concert—Noisy Women Return—probably prompted the same response from many of those who attended: Return? They've never been away! However, the key to understanding that title probably lay two days before; Friday July 15th had seen the successful debut performance of The Noisy People's Improvising Orchestra at St. Paul's Church, Cambridge, a multi-media event with a cast of dozens of musicians, singers, visual artists, dancers and spoken word performers, including five of the six who played at Cafe Oto, Organising that Cambridge event must have been a distraction for all concerned, so the Cafe Oto concert marked the return of their energy and attention to the Noisy Women. Whereas past performances by Noisy Women had taken place at Hundred Years Gallery, the move to the larger Cafe Oto was an indication of the ever-increasing attention that the Noisy Women had been attracting since their January 2022 debut concert.

As at that debut concert (but not at all Noisy Women performances) the Cafe Oto line-up was all female and featured three of the four Noisy Women---Faradena Afifi, Gwendolyn Kassenaar and Maggie Nicols, with pianist Marion Treby being the absent one. As always, the Noisy Women were joined by invited guests; this time they added an international flavour—Korean-born Hyelim Kim on taegŭm, a Korean bamboo flute, Greek-born saxophonist Niki Kokkoli and Canadian-born clarinetist Emily Suzanne Shapiro. As before, the structure of the performance was to start with small groupings and build up to a closing sextet. Before, trios had led to the sextet but this time duos led to trios which then led to the sextet. This allowed each player space to be heard clearly without interruption before playing in the grand finale.

The first duo comprised Afifi and Kim, with the former getting things moving straight away with a variety of utensils, shakers, noises, and even stamping before switching to viola, tapped initially then high pitched. Hyelim responded on flute, leading to a call-and-response between the two which showed them to be a compatible duo, a point emphasised when they sang together; a positive start. Next up, the duo of Nicols on piano plus voice, and Kassenaar painting (see picture above) showed themselves to be just as equally matched, at times mirroring each other's body language. While Kassenaar has increasingly danced and moved while painting, at one point Nicols felt compelled to add some brush strokes to the canvas. Yes, Noisy Women are blurring the boundaries between disciplines. In the final duo before the interval, Kokkoli on alto sax and Shapiro on bass clarinet were in touch with one another from the first notes, fitting together expertly. With neither obviously taking the lead, they batted phrases back and forth, shadowing each other, calling and responding. Impressive.

After the interval, the pack was shuffled to produce two trios. Firstly, Nicols sang and danced with the Kokkoli-Shapiro duet, the trio working well together with no one leading; their set was full of contrasts, ranging from some mellow laid—back interludes to an exhilarating screaming crescendo. Just as impressive was the trio of Afifi, Kassenaar and Hylen Kim, which gradually morphed into a sextet, with one player at a time joining in, a process in which it was fascinating to see the effect of each additional player on the overall ensemble. In the resulting sextet, the three wind instruments blended together well, even when everyone was playing flat out and building towards the inevitable climax and subsequent standing ovation. Yes, the Noisy Women will return again...