By Doug Collette
August 5, 2022
Sign in to view read count 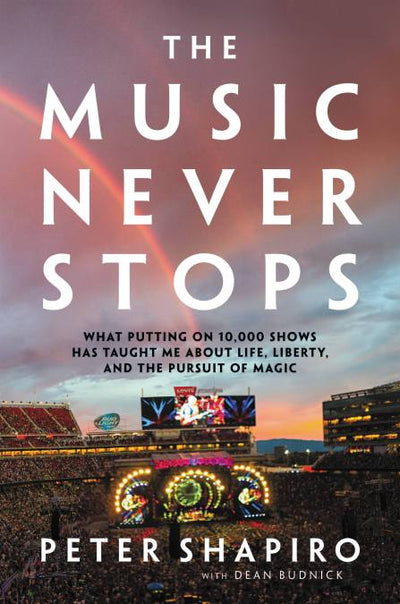 By the time readers finish poring through the three hundred fifty-two some pages of The Music Never Stops, they may be asking themselves if they've ever read an autobiography so self-congratulatory. To be fair, though, Peter Shapiro may deserve his kudos no matter the source: has there been an entrepreneurial spirit so supportive of contemporary music since the late Sixties impresario Bill Graham, he who founded the Fillmores East and West, operated Winterland in San Francisco, provided staging for 1973's Watkins Glen event and oversaw mega-concert tours including Bob Dylan and The Band's 1974 reunion?

Even more objectively speaking, Peter Shapiro credit where credit is due all around. Indeed, because he talks so extensively about those for and with whom he's worked, by mid-point of the hardcover, it almost seems The Music Never Stops—its title taken from a Grateful Dead song from Blues For Allah (Grateful Dead Records, 1975)—is designed as a vehicle for him to give the appropriate recognition to all those who helped him in his various and sundry entrepreneurial enterprises over the years. No doubt the careful attention to detail is due at least in part to the co-authoring of Dean Budnick (of jambands.com fame among other noteworthy efforts with Shapiro); including specific roles in a project as well as the names and titles, Shapiro thus emphasizes the collective effort involved in everything from operation of the Wetlands Preserve and Brooklyn Bowl venues in New York to the Green Apple Film Festival and Central Park Summerstage concert series.

With each chapter heading referencing a specific event in the main writer's timeline, there's a chronological flow to this book that follows Shapiro's evolution as he moves from film-making and production to his eventual primary interest in music-related events and concert production(s). In this way too, What Putting on 10,000 Shows Has Taught Me About Life, Liberty, and the Pursuit of Magic clearly carries the laudable themes of community spirit and social activism without ever overstating the purposeful intent. In fact, the main reason behind all of the native New Yorker's ventures would appear to be two-fold: pursuing his passion for music in a way similar to, but decidedly different from, the role of mere spectator, and finding a means to share that sensation with others, including the audiences and his production partners.

Peter Shapiro's soliloquies proceed at rapid fire pace, quite possibly not all that dissimilar to his engagement in discussions for a project like a 3D film of U2 in concert. As a result, reading his first person discourse becomes an exercise in keeping up with his breathless speed; some more personal reflection throughout, not just in the last ten or so chapters, would add dynamic contrast to this tome as well as add more of a personal flavor to the writing. But it's also valid to read the progression of the writing as a reflection of the man's personal and professional maturation.

To that end, a section of photos posits the author in the company of an eclectic range of personalities from Senator Chuck Schumer to television host Jimmy Fallon to, of course, a multiplicity of musicians including but not limited to his favorites, most notably the Dead, Soulive and Phish. But in these varied shots, posed and impromptu, there's generally an air of equality rather than social climbing or celebrity chasing radiating from the images (in contrast to another famous cultural figure, Jann Wenner of Rolling Stone Magazine fame). Peter Shapiro comes off as a likable enough fellow, charming to be sure but ingratiating to a fault at times (as with the coy references to illicit substances sprinkled throughout) but never truly unctuous (except in his indulgence in hipster lingo: how many times does he use the word 'hang'?).

Still, only passing mention of his marriage and family life, except during COVID lockdown, as well as mere superficial mention of his health issues, unfortunately leave him right at the threshold of caricature some of the time. Ultimately, though, The Music Never Stops paints a picture of a man eager to please for the sake of the art form he loves and its global connection to people. This musiclover's approach to business is based as much on instinct as finances, so the end result he's aiming for on any particular endeavor, whether the assumption of operation at the Capitol Theatre, the establishment of the Lockn' festival or the rescue of Relix Magazine, is far less about profit than passion. In that respect, his goals are laudable indeed and to whatever extent this book elucidates those ambitions and, in turn, the arc of his career, it's worth the quick read (which may only take as long as it took to 'write,' (except for fact-checking).

That said, there's also more than just a mere modicum of insight into the mechanics of concert production and venue operations here, quite apart from Shapiro's earnest tips re pragmatics and personality to like-minded fledglings in his chosen fields (i.e., don't avoid the menial tasks in moving up the ladder). What Putting on 10,000 Shows Has Taught Me About Life, Liberty, and the Pursuit of Magic may not live up to that hyperbolic subtitle, but it does suggest a fitting image for the man who wrote the story to which its assigned: rather than see Peter Shapiro as a musician, it's better to envision him as a masterful composer and arranger, eager to share the inspiration he finds in his material.