Matt Vashlishan: No Such Thing 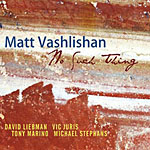 With more and more young players releasing their debuts, it's no small challenge to filter one's way to the top of the growing pile of CDs released each month. Saxophonist Matt Vashlishan couldn't have chosen a better route than on No Such Thing. Recruiting three-fourths of saxophonist Dave Liebman's stellar group—not just one of jazz's hardest working quartets, but one of its most exciting as well—including Liebman, ever-versatile guitarist Vic Juris, and effortlessly swinging bassist Tony Marino, would be enough. But by enlisting drummer Michael Stephans, whose duet record with Liebman, Nomads (ITMP, 2009), was an unexpected and beyond-pleasant surprise, Vashlishan has introduced a greater element of unpredictability into a group whose chemistry, forged over nearly two decades, transcends the empathic and enters the realm of telepathy.

No Such Thing's emphasis is on blowing, but that's not to say there isn't plenty of meat on the bones of this program, with seven tunes from Vashlishan, one by Juris, and a couple of standards. Vashlishan's "Amalgamation" (referring to its combination of Miles Davis' "Solar" and John Coltrane's "Giant Steps") opens the disc on a relaxed but confident note, a quartet track (Liebman sitting out) that swings along amiably and shines a strong first spotlight on the leader, whose alto solo weaves through the tune's frequent changes with aplomb and the slightest hint of grit. Juris, largely working with a warm, clean tone throughout, delivers an equally striking solo, but it's in the song's final seconds, where he effortlessly cascades Lenny Breau-style harmonics, that the guitarist's impressive and nearly matchless command of his instrument becomes fully clear. Juris' solos are consistently arresting, but it's the small but inevitably significant things he does throughout that make him a guitarist worth following in any context.

"Sailing," driven by Juris' 5/4 arpeggios, is Vashlishan at his most lyrical, with both saxophonists on soprano. Vashlishan and Juris both deliver inventive solos, but it's Marino—whose solos are always all the more compelling for their relative rarity—who makes the track a highlight. "Lennie's Place," based on the changes to the classic "On Green Dolphin Street," is another highlight. Juris sits out to make this fiery swinger a chordless feature for Vashlishan and Liebman, on alto and tenor respectively, building to a boldly climactic trade-off.

Juris opens his own "For Shirley" with another impressive display of voicings and harmonics, a gentle ballad that, with Liebman again sitting out, provides Vashlishan the opportunity to stretch out, proving that the altoist possesses not just the stamina and imagination, but the focus and constructive sense to maintain interest across a longer stretch.

Throughout, Stephans drives the group with just the right combination of energy, texture and restraint. He may not rattle any cages or break down any barriers, but with the thoroughly engaging No Such Thing, Vashlishan has crafted a modern mainstream album that deserves, like the best cream, to find its way to the top of the heap of debut discs and into the public eye.