By Bill Leikam
January 28, 2010
Sign in to view read count
The Terrance Brewer Quartet
The Douglas Beach House
El Granada, California
The storm had already hit—waves were lashing the boulders along the beach just outside the Douglas Beach House (aka The Bach Dancing & Dynamite Society)—when jazz guitarist Terrence Brewer and his quartet (Wayne De La Cruz on the B3 organ, Jim Grantham on sax and Micah McClain on drums) took the stage to a nearly full house. Brewer's playlist came primarily from last year's Groovin' Wes (Strong Brew Music, 2009), a tribute album to Wes Montgomery. It was this album that hit the national radio playlist at number 18 and a few weeks later settled into the top 10 jazz albums nationally. CBS 5 anchor Lisa Chan referred to Brewer as "the Bay Area's newest rising star!" 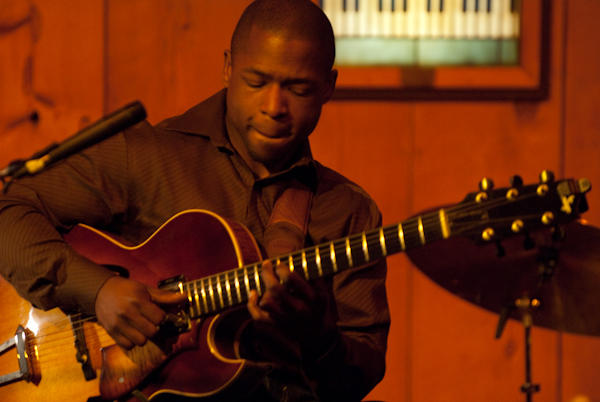 Without introduction, Brewer snuggled up to his guitar and smoothly stepped into his first number. It was immediately apparent that sax-man Grantham needed to warm up and that De La Cruz on the B3 had to find his stride and blend more warmly with both McClain and Brewer. Nevertheless, Brewer's guitar, which was reminiscent at times of jazz guitarist Bruce Forman, came through. Occasionally, Brewer's guitar had a Montgomery-ish flavor to it, but he clearly has his own style. McClain's drumming was impressive, as he kept the rhythm while at the same time accenting without overwhelming the rest of the unit. He tends to use his ride cymbal rather frequently and as a part of the foundation for his drumming style.

After the first tune, Brewer introduced his band and added, "It's an honor to be a part of this historic venue." This launched the band into Montgomery's "Bumpin' on Sunset." It was with that tune that Brewer's guitar stood out, as he drew the notes from his instrument with strong yet smooth and tasty playing. By the third tune in the set, the band had warmed up and melded into a unit. Sometimes when the band was deep into a tune, Brewer called out to his musicians with a whoop, or a yeah or a whoa, affirming that they were doing well. In contrast to some jazz bands that leave ample room for individuals to solo, there was very little soloing within this quartet.

As the concert unfolded, especially during the second set, the audience responded with increasingly extended applause. This sophisticated audience appreciated the Terrence Brewer Quartet. If you happen to hear that this jazz band is in your area, it would be well worth one's time to step out to a club or other venue. Pay attention to jazz guitarist Terrence Brewer—you will be hearing from an influential force when it comes to the jazz guitar.