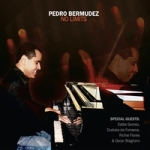 The term Latin Jazz has been assimilated into the modern vocabulary to describe a certain genre of music, though they are two distinct words which can stand alone. Such is the case withNo Limits, by pianist Pedro Bermudez. He articulates each track with its own identity with music that does not fall into any one category. Adept at both the Latin and jazz idioms, this record showcases his talents as such.

Bermudez came up through the salsa school in Puerto Rico where he was pianist for several of the best bands on the island. But on No Limits he does not dwell only on his mastery of the piano montuno and percussive accompaniment; rather he composed and arranged all the songs to demonstrate his broad range of skills and those of his accompanying musicians. There are flashes of his mentor Hilton Ruiz, which are conjured up on some of his bop influenced solos and high flying runs, showing the talents this young pianist possesses.

Having formally studied Brazilian music, Bermudez weaves the samba feel into several selections such as "Redentor" and "Chorinho Para Maria," adds a frenetic pace to "Bombaiao," and brings in vocalist Ana Baiana on the Jobim classic "Caminos Cruzados." The band stretches out on the traditional Afro-Caribbean numbers "El Jarriero," which opens with a haunting bass tumbao, and "Ivan's Cha," featuring excellent sax work by Ivan Renta.

On this his first recording as leader, Bermudez has stepped up to the high standards which have been established by Latin pianists, and took it into his own direction. Each selection is well over five minutes which allows room for song development and there is no sense that the production was hurried, but well thought out and executed with passion and grace.