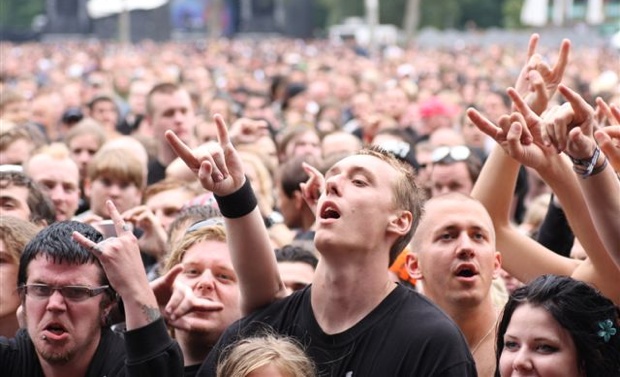 BY JOHN BEATY
February 16, 2012
Sign in to view read count
The Stretch Movement's main goal is to build a new young audience. This seems like it should be an obvious statement, but jazz has ignored the fact that new young listeners are not flocking to the music. The vast majority of listeners that end up at jazz shows are students, who are studying the music, or older fans, who will not be around forever. The way things are currently set up will not result in a self-sustaining long-term system. The now-old lions have created a Ponzi scheme that is not interested in breaking in new young artists or bringing in young listeners but instead opts to turn a blind eye to the reality of the jazz world, and keep on with business as usual until the wheels fall off. Ultimately this will not serve instrumental music well in the long-term.

I came to jazz in a very roundabout way. My family moved from Beaumont, TX to San Antonio, TX when I was five years old. I spent my youth growing up in a city with one major sports franchise; The San Antonio Spurs. My twin brother and I are the first and only musicians on either side of my family. The year my family moved to San Antonio The Spurs drafted David Robinson with the number one overall pick in the NBA draft. Everyone who was young and played basketball in San Antonio loved David Robinson. Coincidentally, David Robinson was a saxophonist in his spare time. I had a basketball card of David Robinson with a photo of him playing saxophone and that almost insignificant detail drove me to eventually pick up the horn.

As life would turn out, a career in basketball wasn't in the cards for me. While I love basketball, I don't need to play professionally or know the tradition of basketball to enjoy it. Similarly, I fell in love with saxophone for the simple fact that if I practiced, I got better. Seeing improvement is what becomes addictive. I was introduced to jazz by great teachers after I had shown enough progress on my instrument to comprehend the work that goes into becoming a jazz musician. I threw myself into jazz because there were no saxophone virtuosos in other genres of music that could compete with Charlie Parker, John Coltrane, Joe Henderson or the other greats. In retrospective, the mistake I had made was copying the vehicle they chose to feature their ability, swing. Swing was music of the time, but it is not music of the current time. The fact of the matter is you can't sell tradition and swing is the music of past of generations. There are few, if any living jazz musicians that are famous enough to inspire young people with no family ties to jazz to aspire to be jazz musicians.

As far as jazz is concerned, if we look at Lincoln Center Jazz Orchestra as highest professional achievement in jazz (financially speaking), we are in trouble. Wynton Marsalis' big band rarely changes personnel and while that is perfectly fine, if the jazz machine is promoting a system that is providing new leaders and the fact that the "apprentice system" is still alive, the music's most famous big band is disproving this point. The message between the lines is: there is no room for new leaders. There is literally no other jazz band, that is strictly instrumental, that can promise it's musicians the salaries (or anything close) that the LCJO does while playing swing music. On top of that, Marsalis is now 50. We have lived to see a day where Marsalis is no longer the young lion fighting to gain jazz the respect it deserved. Marsalis has created a strong brand that serves only himself. His accomplishments and vision for jazz have not benefited the greater community. Marsalis himself does not know what it is like to have a record go platinum in the year of its release. He has made obscene amounts of money without being held to the same standards of all other forms of popular music. I find this to be incredibly impressive, but it is not creating new leaders nor is it winning over many new young fans.

My goal isn't to promote jazz or bury it. I started down a path in music because I loved learning the saxophone and it is now my intention to create an alternative path so that young people can see pursuing an instrument as a worthy investment of their time and energy. Jazz captured the struggle of a certain period in American history. Jazz gave the saxophone a place in the world. The music created the modern drum set. Jazz explored improvisation to its limits. I am not here to argue about the history of jazz or the origins of the word. It is pointless to waste time and energy trying to change the past when there is so much to be done in trying to build a better future: to do this, we need to attract new fans.

if you want to play a gig in New York City (and many other places around the country), the onus is on you to book, promote, create the music, rehearse the band and bring bodies willing to buy drinks at the show. This is a difficult task in any music style, now add the baggage and preconceived notions surrounding the word "jazz." It is incredibly difficult to get young people unattached to jazz to want to see even their musician friends at such a club. To reach a younger audience it is common sense to look at how music styles with actual young fans present their music. In New York, I see many of my contemporaries playing in non-traditional music venues. These musicians are using projectors and various technologies to draw listeners into their music and create a multimedia experience. If we want to see new young audience members at instrumental shows we must go to them not only musically but physically too (to the places they see live music).

We don't owe the older generation anything. Pursuing only the tradition won't get us anywhere. We have given of enough of ourselves and we have been left with a broken financial system in this jazz world. We aren't going to come up with new scales, chords, or rhythmic relationships, but we do have the freedom to reject previous styles and build a music community that draws on both the strength of virtuoso instrumentalist and the strengths of current popular and relevant music styles.. We don't need to focus on selling jazz. We need to focus on selling the idea that playing an instrument can be a career and that it can be entertaining to all people, not just other musicians. We need to focus on appealing to and inspiring younger audiences to learn what we do. There will be no prolonged success if we cannot entertain the youth.

We are Stretch, All are Welcome!

[Special thanks to Jon Crowley, for his assistance in the creation of this article. The views represented in this article are the views of John Beaty alone.]