By Troy Collins
November 27, 2016
Sign in to view read count 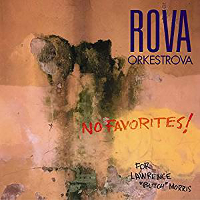 Ever since its formation in 1977, Rova, the pioneering West Coast saxophone quartet, has been augmenting its ranks to explore structured improvisation. No Favorites! pays homage to Lawrence D. “Butch” Morris, the inventor of Conduction, a revolutionary system for organizing large-ensemble improvisation using coded gestures. This ambitious album epitomizes a working relationship that Rova began with Morris in 1988, while also reflecting parallel working methods reaching back to the mid-1970s. Building on previous efforts in this milieu, the saxophone quartet joins forces with an acoustic string quartet and an amplified power trio, expanding its tonal color palette in the process.

Larry Ochs' "Nothing Stopped/But A Future" is the most complex. Percussionist Gino Robair serves as conductor, leading the musicians through the labyrinthine score's intricate sequence, which permits individuals the freedom to choose between multiple strategies. Constantly fluctuating levels of freedom and restraint yield a bewilderingly kaleidoscopic effect; instruments materialize, coalesce and subside suddenly, in fleeting episodes reminiscent of John Zorn's post-modern game pieces, themselves contemporaries of Morris' Conductions.

"The Double Negative" highlights the sub-groupings of Orkestrova in a trilogy of graphic scores, presenting three distinct sets of instrumental combinations that represent classical, jazz, and rock, before uniting in a powerful, collective finish. The strings bring austere formalism and harmonious contours to the first segment, a keen interpretation of Jon Raskin's "Flower Power." The second, Steve Adams' "Graphic #38 (for Steve Lacy)," is performed with breathy understatement by Rova, whose sinuous hocketing recalls the dedicatee's oblique intervals, while the third, Adams' "Graphic #41," is given a nervy metallic reading by the electric power trio.

The epic finale, "Contours of the Glass Head," employs Conduction, but with the role of "conductionist" alternating among Rova's founding members. Lavish chordal drones intermittently convey an implied sense of narrative with the precision of a pre-written score across a range of multihued interludes: sinewy interplay from the strings; cacophonous exchanges between bleating saxophones; and searing electric rhapsodies from guitarist John Shiurba all conspire towards a unified finale of majestic polyphony.

Transcending musical categories and the outdated structures of genre, No Favorites! is more than just a tribute to Morris' ground-breaking techniques, it is a democratic appeal for sonic unity that resonates with the rich history of large-ensemble improvisation, in which instruments and ensembles are no longer segregated by stylistic constraints.

Nothing Stopped/But A Future (for Buckminster Fuller); The Double Negative; Contours of the Glass Head.