By FRIEDRICH KUNZMANN
December 20, 2018
Sign in to view read count 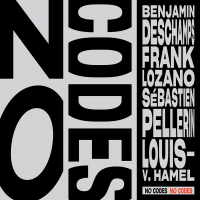 After having been exposed to the enticing Trioliloquy by the A/B Trio and Christian McBride's thrilling New Jawn, here is another formation which renounces any harmonic instrument and rather relies on the abilities of two saxophones and a tight rhythm section—so No Codes has no chords. Montreal-based alto saxophonist and composer Benjamin Deschamps is joined by Frank Lozano on tenor sax, while the rhythm section is Sebastien Pellerin on bass and Louis-Vincent Hamel driving the beat.

In a collage between bebop tradition and freer jazz tendencies, the four protagonists naturally communicate their ideas to one another and reflectively build upon them with conviction. Interrupted by only a few short Interludes, the set otherwise flows with ease and vigor. Pieces like the opening "Rules of Compression" or the restless walking-bass number "No I didn't" showcase the group's rhythmic tightness at some speed, while compositions such as "Song for Daniel" or "Double Meaning" are of a more melodic nature and find the musicians switching to the perspective of storytellers.

What all the tunes have in common though is the airy production and the courage not to fill all free space with lines. Deschamps and his bandmates are attentive and respectful of one another, complementing the other's phrase or motif rather than starting a new one, as aptly demonstrated on the free-spirited "Quick Fix." As a result, intimate duo moments occur in an instinctual way and furthermore justify the improvisatory interludes, thus profiting from the intriguing acoustical treatment of the record.

No Codes is a worthy addition to the recent spate of chordless releases and puts Benjamin Deschamps on the map, not only as a dexterous player but also as an innovative composer.