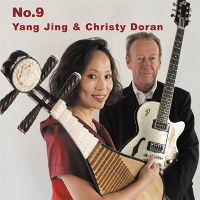 Their meeting point is the crossroads between composition and improvisation, between tradition and experimentation and between Eastern and Western sensibilities. Jing's pipa provides delicate lyrical narrative on "Lute in Garden," while Doran's Duesenberg guitar casts long, shimmering notes. "Moving East"—one of two Doran originals—sees the duo juggling the tune's circular motif. Soloing in turn, the notes overlap like currents in the same stream, creating little eddies that froth and then dissipate. Doran's "The Other Side of the Fence" is similarly hewn, sliding between sculpted interweaving melodic lines and flowing improvisation.

On "Salu Abend," Jing's strings bend and cry a Delta blues tale. Doran provides deft atmospheric accompaniment and the combined effect is not unlike guitarist Ry Cooder's dark and moody Paris Texas (Warner Bros, 1985). There's hypnotic elegance within the simple architecture of "Birnenblüten," with Jing and Doran again swapping lead and accompanying roles in this gentle waltz. "Shadow of Roses" slowly sheds the hazy psychedelic slumber of its intro to embrace a West African motif. The duo's casually intimate dialog is etched in the blues and the seamless confluence of Asian, African and Americana traits will surely appeal to fans of guitarist Bill Frisell's all too short- lived band The Intercontinentals.

The final tune is keyboardist/composer Joe Zawinul's classic "In a Silent Way." Doran prepared a one-hour suite based on Zawinul's composition for a festival project by his band OM around the time of this recording and its laid-back vibe fits into his session with Jing very well. In many ways "In a Silent Way" provides a fitting conclusion to the meeting—Alpine tone poem or Himalayan lament, the familiar pastoral theme played by Jing has a haunting quality that transcends time and place. In its six sublime minutes, Jing and Doran come closest, perhaps, to presenting the truly unified voice that brushes aside barriers of genre and culture.

Jing and Doran's collaborative debut is a finely balanced work of gently beguiling beauty. There is quiet magic in the folds and contours of their musical union, and the promise of greater returns still in the territories they have yet to map out together.

Lute in Garden; Moving East; Salu Abend; Birnenblüten; Shadow of Roses; The Other Side of the Fence; In a Silent Way.