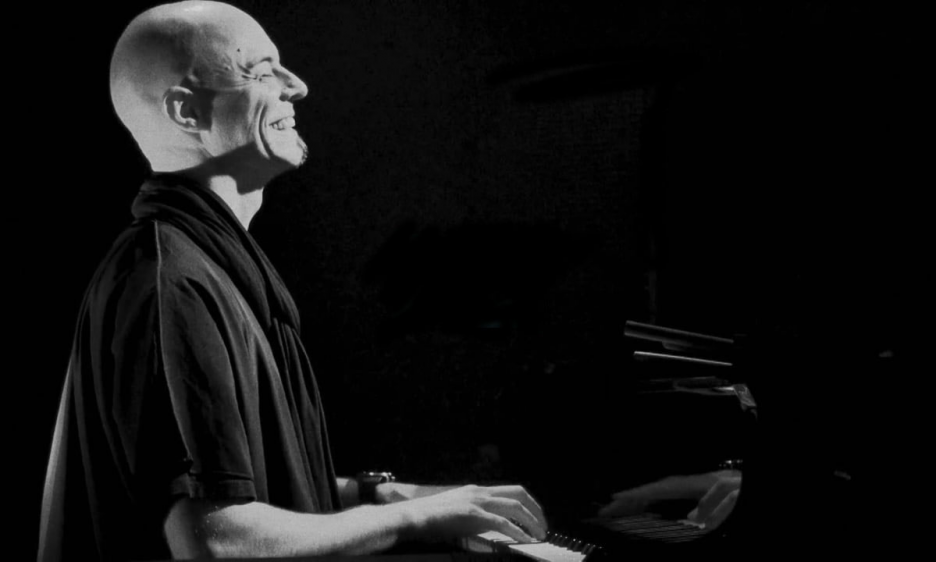 The way Nik Bärtsch dresses reveals a lot about his music. He steps up to the piano wearing a Samue, the traditional dress of Zen Buddhist monks, and sneakers. One represents a spiritual tradition thousands of years old, requiring the utmost discipline and training to master. The later represents modern casual fun. His Samue reflects the time he spent in a Japanese monastery, the sneakers his weekly Monday night concerts at his club Exil in Zurich.

Bärtsch's music brings these contradictory elements together to create an entirely unique style, often called "zen-funk." The performance of Nik Bärtsch's Ronin at the Bop Stop marked their first time in Cleveland. The group quickly won over the packed crowd, that yelled for and cheered it at every opportunity.

Bärtsch came to Cleveland as part of an international tour promoting his 2018 album Awase (ECM Records, 2018). The album title comes from a Japanese Aikido term to combine different energies. There has never been a better descriptor of Bärtsch's music that sees different rhythms and melodies coming together in a great display of musical discipline. In this discipline there is also freedom, as the musicians can create slight variations on themes of each modul, Bärtsch reduced the Ronin line up from a quintet to a quartet for Awase to foster more improvisation. With fewer players vying for a limited amount of musical space it's easier to experiment, like the difference between a crowded rave where your movement is limited to jumping up and down on a single spot, and a ballroom where you have the space to make more complex motions.

Bärtsch and reed specialist Sha tested the boundaries of their respective instruments. Bärtsch continually tinkered with the strings inside his piano, muting them while playing his keys to create a funky clavinet sound, or striking his piano strings with mallets like a vibraphone. Sha used the slap tongue technique, where the musician's tongue pulls the reed away from the mouthpiece, to create a percussive sound similar to beat-boxing.

"When you want to be a drummer, but you picked the wrong instrument you learn to adapt," said Sha.

Bassist Thomy Jordi and drummer Kaspar Rast kept the pocket steady throughout, providing the funk to the zen of Bärtsch and Sha. After its first set, composed of every song from Awase the band left the stage, the concert seemingly over. The audience gave Ronin a standing ovation and yelled for its return until the band came back to perform two more modul's, "Modul 17" and "Modul 45."

The great George Clinton once said the funk "not only moves it can remove," curing your faults, defects, and shortcomings. Bärtsch proved the master of funk correct, with an invigorating show that had the packed crowd clamoring for more. His hard-hitting grove underpinned by repetitive patterns, causes one to zone out and focus on the moment at hand. Bärtsch views music as a spiritual experience, and after seeing him live it's hard to disagree.