Nik Bartsch's Mobile at The Rubin Museum of Art 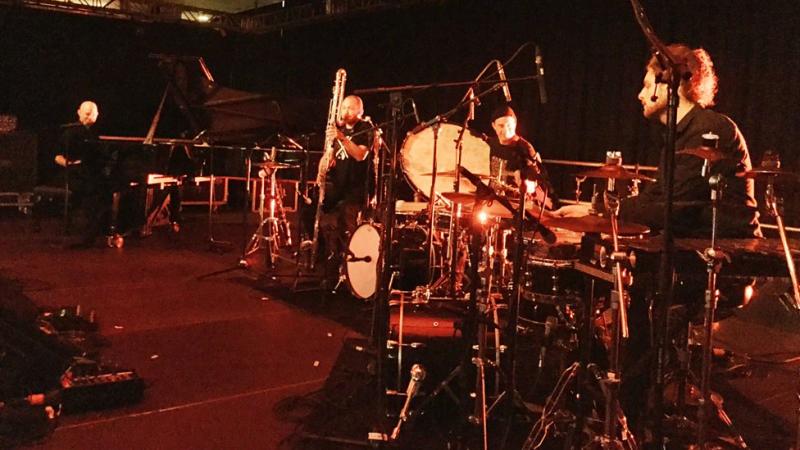 Having seen Nik Bärtsch's Ronin live (albeit eight years ago), listened to Continuum and read the detailed review which notes the differences between the groups, did not lessen the impact of Mobile in concert.

The venue was perfect—a small auditorium which held about three hundred, facing a raised stage. There, the Mobile quartet was arranged with Nik Bärtsch's piano stage right, the bass clarinet and contrabass clarinet of Sha center and forward, Kaspar Rast's drums center and behind with Nicolas Stocker's drums and tuned percussion stage left. All the performers wore black, making the lighting, which tracked the music, even more dramatic.

The show was scheduled to be from 7:00-8:30, and after a brief introduction, the music began, recognizably from the album. Immediately, the entire performance space changed as the interaction of the persistent unit pulse, different meters and phrase lengths moving in and out of phase, changing instrumental densities and actual harmonic movement took effect. The "groove" which deepened as the music progressed, never stopped; it would not be characterized as Ronin-like "funky," but it did make the body move. Entrancing is not quite the word for it, but astonishing might be.

The first piece actually ended, with some applause, but it was unclear if this was intended or not. In any case, the next hour (or so it seemed) was filled with continuous music as the various modules were merged. This is different than the album, which has a few seconds of silence between them, and produced an exhilarating, floating, timeless feeling that was almost out-of-body. Punctuated by shouts of "Ho!" from Bärtsch to signal changes, Mobile worked its magic.

This music is extremely precise and delicate, and yet is simultaneously full-bodied and powerful. There is absolutely nothing which is extra -every piano and reed note, every percussion sound is needed and has its place. Each performer merged into the musical organism named Mobile, while paradoxically remaining an individual who had the freedom to improvise. In this context, improvisation takes on a somewhat special meaning. Every field of intense study ends up developing a vocabulary, a lingo if you will. Bärtsch's includes such terms to describe the means used to improvise as varying modular lengths, spreading ghost note nets, soloist behaviour like animal mimicry, sound blending and swarm movements among others.

The tension between the composed module and its performance through time is perceptible and is part of the experience. While Bärtsch is clearly the leader who directs the larger structure, Sha, Rast and Stocker could be seen and heard giving and taking subtle cues throughout the performance.

Decidedly heady, and yet highly emotional and extremely moving, the music of Mobile is not soon forgotten.