BY DAN MCCLENAGHAN
March 31, 2009
Sign in to view read count 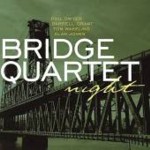 For jazz fans with some historical listening under their belts, the word "Bridge" will bring to mind Sonny Rollins' album, The Bridge (Bluebird/RCA, 1962), a set that Rollins released after a three-year hiatus, and changed the saxophonist's musical trajectory from Ornette Coleman-influenced freedom to a more traditional mainstream, but still adventurous, sound.

The group's previous set, Day (Origin Records, 2008), was a studio affair, recorded in the same 36-hour period as Night, which showcases the ensemble in a live setting. The feeling on both sets is much the same, with Night, as one would expect of a live recording, featuring the tunes in a more stretched out mode, with more room for soloing all around.

Much like Rollins, the Bridge Quartet takes on familiar melodies with a fiery gusto, beginning with the buoyant 12-minute take on the Lerner and Lowe gem, "Wouldn't It Be Loverly," moving into an energized and freewheeling rendition of "Green Dolphin Street," with Dwyer wrapping up the roll down that familiar avenue in a "Surrey With the Fringe on the Top."

"A Face Like Yours" opens with Darrell Grant's gorgeously supple piano sound before Dwyer blows in with a yearning feeling. It's 11 minutes-plus of heart-rendering, breathtaking beauty in the middle of a mostly high octane affair that proves the Bridge Quartet has its own sweet way with a ballad.

"Strode Rode," from the pen of Sonny Rollins, blasts full speed ahead, full of muscle and grit, and Billy Strayhorn's "Isfahan" steps lightly, in pretty and contemplative fashion.

The set closes with "Bemsha Swing," one of Thelonious Monk's most brilliant tunes. It opens on a smooth rolling rhythm before the saxophone slices in. Pianist Grant gets a lot of space, and he shines in it, smoothing out the Monk-ian angles and taking things into a dance groove before Dwyer shifts things into a freer gear, and addresses the sharp corners of Sonny Rollins' "East Broadway Rundown," from the 1966 Impulse! Records set of the same name, along the way, bringing an especially fine jazz set to a close.

Wouldn't It Be Loverly; Green Dolphin Street; A Face Like Yours; Strode Rode; Isfahan; Bemsha Swing.