Wes Montgomery: Back on Indy 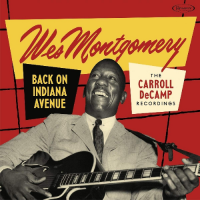 slideshow
Back in 2012, Resonance producer Zev Feldman was contacted by Brook Reindollar, who worked with Carroll DeCamp, an Indianapolis pianist and self-taught arranger. Reindollar said he had digital audio tapes (DAT) of guitarist Wes Montgomery recorded in Indianapolis. Reindollar was passed along to Zev by Lewis Porter, a jazzz historian, professor of music at Rutgers University and pianist. Reindollar said part of the DAT was recorded in a studio while the balance was live.

Fortunately for us, DeCamp in the 1990s had loaned the the tapes to educator and saxophonist Jamey Aebersold, who converted them to DAT. Then Aebersold returned the tapes to DeCamp. Not long after, they were destroyed in a fire that consumed DeCamp's entire house. Sadly, any notes that DeCamp kept on the tapes and personnel were destroyed as well. But the DAT survived, thanks to Aebersold.

Zev was left to guess about the time frame in which the material was recorded. After multiple trips to Indianapolis, Zev guessed they were from 1957 to 1959. He also tried to determine with whom Montgomery was teamed on the different tracks, a challenge that proved to be impossible.

The result is the newly released Wes Montgomery: Back on Indiana Avenue, The Carroll DeCamp Recordings. The two-CD set from Resonance comes with a 44-page booklet of liner notes, interviews and images, and features 22 previously unissued tracks. The material is broken into three ensemble sections: piano quartets with guitar, piano, bass and drums; organ trio and sextet with trombone and saxophone; and Nat King Cole-style trios with guitar, piano and bass.

Based on the tracks in the first section, I'm guessing they were recorded either as a late 1959 warmup for Montgomery's recording of his monumental The Incredible Jazz Guitar of Wes Montgomery in January 1960. Or more likely, the tracks were recorded while Montgomery was on tour in late 1960 to promote the album's release. If I had to guess, I'd go with late 1960.

The tracks in the first section include Four on Six, Mr. Walker, 'Round Midnight, So What, The End of a Love Affair, Tune Up and West Coast Blues. The recording of So What puts Montgomery recording after August 1959, when Miles Davis's Kind of Blue was released. And Four on Six, Mr. Walker and West Coast Blues all are from The Incredible Jazz Guitar.

The second section would have been recorded at the tail end of 1959 or early 1960, since many of the songs appeared on The Wes Montgomery Trio. These tracks include Jingles, It's You Or No One, Nothing Ever Changes My Love for You, Ecaroh, Sandu and Whisper Not.

The so-called Nat King Cole-style trios in the third section were probably recorded a bit earlier but not by much. The tracks are Stompin' at the Savoy, It's You Or No One, Opus de Funk, Summertime, Between the Devil and the Deep Blue Sea, Easy Living, Four, I'll Remember April and The Song Is You.

Songs that Montgomery records here for the first time, as far as we know, are So What, It's You Or No One, Nothing Ever Changes My Love for You, Opus de Funk, Between the Devil and the Deep Blue Sea, Easy Living and The Song Is You. What makes this album special are the different groups playing behind Montgomery and the three phases in which his song choices and and attack vary.

On the album, we hear Montgomery's guitar during his Riverside period fully formed. Earlier Montgomery in Indianapolis from Resonance featured a largely straight approach. Here, the guitarist is thoughtfully weaving and bobbing on songs like Tune Up and It's You Or No One, sailing on The Song Is You and Horace Silver's Ecaroh, and digging in on the ballads 'Round Midnight and Whisper Not.

This new album provides a glimpse of Montgomery on the cusp of superstardom and offers us a bridge from The Incredible Jazz Guitar and Movin' Along in 1960 to Groove Yard and So Much Guitar! in 1961.

JazzWax clips: Here's a mini documentary for the album...