The sultry jazz singer takes on a wide swath of Young’s catalog in this whole Young program that’ll have you feeling like this is the first time you’re hearing these songs… this is sure to set the standards for later efforts to come.
&#151Chris Spector, Midwest Record 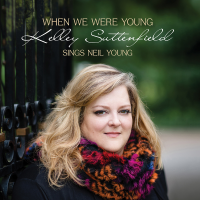 slideshow
Kelley Suttenfield is a versatile jazz singer with a warm, intimate voice that’s perfect for her newest project, When We Were Young – Kelley Suttenfield Sings Neil Young (September 13, 2019). The album includes some of Neil Young’s most famous songs, as well as a couple of tunes written but never performed by him. Tackling songs that are long associated with the pop legend is an audacious endeavor; however, this is not a tribute album. Rather, Suttenfield and her collaborator and arranger, guitarist Tosh Sheridan, have created interpretations that are fresh and personal.

Suttenfield is a regular on the New York jazz scene and performs at various venues around the East Coast. She has headlined at notable clubs such as The Iridium and Jazz at Kitano in New York City and appeared at in London. She has also toured Europe and was a featured guest with the Great Danes Big Band as part of the Copenhagen Jazz Festival.

When We Were Young is Suttenfield’s third album. She’s an artist who is not content to rest on her laurels. Each of her projects is quite different from one another. Her debut album, Where Is Love? (2009), was a mix of jazz standards and pop tunes backed by a five-piece band. Her next outing, Among the Stars (2014), is a duo album. It’s a conversation between Suttenfield and guitarist Tony Romano, of whom Blogcritic’s Magazine has said, “These are songs sung like you’ve not heard them before. In her hands they are awash with emotional intensity. They are performances you are not likely to forget.”

On When We Were Young , Suttenfield once again takes her artistry in a new direction by re-imagining songs by an iconic rock star as jazz tunes. Suttenfield’s version of Young’s “Harvest Moon,” which she had been performing in her live shows, resonated with her audiences, so she teamed up with her long-time collaborator, Sheridan, to make this album.

Sheridan arranged and produced When We Were Young . A guitarist and composer, he is a graduate of Berklee College of Music, with a degree in Jazz Composition. He also has a Masters in Jazz Performance from City College of New York. Suttenfield says, “This was very much a collaborative project. Tosh’s imaginative arrangements shine a new light on Young’s works, creating a rich aural landscape. I couldn’t have done this without him.”

They also brought on board a rhythm section of three top New York-based musicians who make up the group named (718), an electric trio groove music band that blends modern, and creative jazz-inspired improvised music. The group comprises Matthew Fries, winner of the Great American Jazz Piano Competition and Phil Palombi, a Grammy Award-winning bassist – both of whom regularly perform with the Curtis Stigers Band – as well as Eric Halvorson, a NYC first- call drummer. The group provides the perfect blend of jazz and rock sensibilities.

Members of The Memling Ensemble, a musical partnership of Metropolitan Opera Orchestra musicians that have been concertizing in various configurations for over twenty years, provide strings accompaniment on several tunes. The configuration for this album includes Derek Ratzenboeck on violin, Vincent Lionti on viola, and David Calhoun on cello.

These renditions of Young’s tunes are accessible and appealing. Suttenfield opens the album with her popular version of “Harvest Moon.” The instruments weave around her soft, almost whispery voice, capturing the ethereal nature of the song. “Heart of Gold” is one of Young’s most well-known songs. Sheridan reconstructs the tune with a string arrangement. “Only Love Can Break Your Heart” has been one of Suttenfield’s favorite tunes since childhood. The original ending of this song is a bit repetitive. Here, the band adds interest to the ending by adding layers of sound. “The Losing End” is a country ballad, a breakup song with beautiful harmonies. Suttenfield was attracted to the imagery of “Flying on the Ground,” one of Young’s earliest tunes that was first recorded during his stint with Buffalo Springfield in the 1960s. On “The Needle and the Damage Done,” a song about the damage done by drugs, Suttenfield’s plaintive vocal, creates a dark and somber effect. Suttenfield and the band present a funkified country version of “Love is a Rose.” Young wrote “Down by the River,” a song about someone murdering his lover, when he was ill with a high fever. Sheridan’s arrangement is built around the 7/8 bass line.

Suttenfield not only listened to just about all of Young’s recordings, she also did a great deal of research online, where she discovered “Fool for Your Love.” The song had been around for many years before Young finally recorded it during a live performance in 2000. “Barefoot Floors,” on the other hand, was recorded but never released. The song is a lullaby for Young’s child. Suttenfield often ends her live performances with “Old Man.” The song considers aging and death. He wrote it for the caretaker of his ranch that he was able to purchase at a young age.

The musicianship on this album is stellar, but the real stars of the project are Suttenfield's sensual, emotive voice and Sheridan’s evocative arrangements. It’s not easy taking on songs that are so closely identified with a seminal artist like Neil Young, but Suttenfield and Sheridan impress by staying true to originals while imbuing them with their own personalities and artistry.

When We Were Young – Kelley Suttenfield Sings Neil Young will be available in stores and online everywhere on September 13, 2019.