A wonderful warm-hearted listen from top to bottom! --Jane Monheit 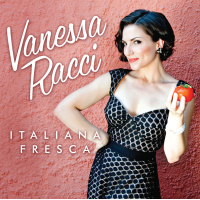 Her Birdland show, says Vanessa, “will be an ode to Italian-American music, family, and culture, with fun personal anecdotes.” The goal, she explains, is “to express the modern Italian-American female perspective.

Praised for her “truly remarkable voice and style” (Mike Bennett, WHUD radio), Vanessa has used big-band, small-group, and Afro-Cuban jazz as well as lush strings to give that music an exciting new sound. At its heart is her shimmering, sweet-and-sour tone, impeccable musicianship, and Italian passion. “I absolutely love the idea behind this album,” says the acclaimed jazz singer Jane Monheit, whose master class at Birdland brought Vanessa to the attention of owner Gianni Valenti. “Vanessa,” adds Jane, “with her clear, mellow alto, has taken songs treasured for generations and completely redefined them.”

The arrangements and piano-playing come from Yaron Gershovsky (longtime musical director for the The Manhattan Transfer) and Glafkos Kontemeniotis, a respected fixture on the New York jazz scene. Leading the team was David Finck, a much-sought-after producer and one of the most admired bassists in jazz. Having worked with George Michael, Rosemary Clooney, Tony Bennett, and Gladys Knight, David knows all about vocal artistry; he was knocked out by Vanessa’s “natural sense of rhythm and flow, and her wonderful ability to communicate both musical and poetic language.”

Italiana Fresca was inspired by Vanessa’s late grandfather, Frank Prisciantelli, who passed in 2016. He lived in the basement apartment of her family home in Thornwood, New York, and his cherished Italian records resounded through the house. The album commemorates Frank and the music he adored, much of which is in danger of fading away. “I want to keep these songs alive for a new generation of Italian-Americans,” says Vanessa.

She had other missions in mind, one of them feminist. “I feel these songs show the many moods of the Italian woman. I wanted to share them in the female Italian voice, which is not as well represented as the male voice. I also wanted to modernize them, while still bringing out the original meaning.” To that end, she wrote new English lyrics for several songs. “‘O sole mio” is famous in the U.S. as “It’s Now or Never,” Elvis Presley’s 1960 hit. But the words he sang bear no relation to the original ones; Vanessa’s version restores the ethereal quality of a love song whose Italian lyric proclaims, “you are my sunshine.” The comic favorite “C’é la luna (mezz’o mare)” (There’s a Moon in the Middle of the Sea), made famous by Dean Martin and Louis Prima, gains a blast of new energy from a swinging big-band arrangement. Yaron puts an Afro-Cuban spin on the 1950s hit “Tu vuò fà l’americano” (You Try to Act the American), about a big shot eager to flaunt his Americanized ways; and the object of his affection, who calls his bluff. Whatever the song, Vanessa’s jazz feeling and acting ability bring it vividly to life.

Musicians performing with Vanessa for this show are: