Two on Two: Courvoisier & Feldman Are Both Jazz and Life Partners

SOURCE: ALL ABOUT JAZZ @ SPINNER
February 19, 2010
Sign in to view read count 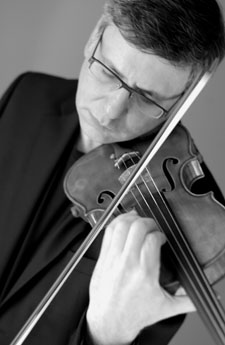 Pianist Sylvie Courvoisier and violinist Mark Feldman have had a long and creative partnership, performing onstage together since 1995 and collaborating on that life project called marriage since 2000. It's an interesting balancing act that some creative couples are never able to reconcile, but these two couldn't see it any other way.

“It would be trickier if one of us was the district attorney or a gym teacher or something," Feldman points out. “Both of us like to work a lot and go out on the road. I think if we both weren't musicians it would be harder for the other one to understand. So we never have these issues."

The two have taken very different paths to get to this point. Courvoisier grew up in Switzerland, the daughter of a jazz pianist. She studied composition, piano and conducting at Conservatoire de Lausanne, and jazz at Conservatoire de Montreux. She was already established on the European avant-garde scene (playing with people like trumpeter Enrico Rava and guitarist Marc Ducret) when she met Feldman in 1995; nonetheless, her move to New York in 1996 was an important next step in her career. “At first it was a little scary to play in New York, but the scene is great because there are so many great musicians and it's really challenging and inspiring," she points out. “I've met a lot of people who push me to do better."

Feldman grew up, studied and worked in Chicago before landing in Nashville, where he played violin in a variety of styles including classical, pop, and country. Something of a late bloomer in regards to jazz, his first paying gig playing avant-garde jazz came at age 31. “I couldn't take it anymore," Feldman says of the change. “I was becoming so unhappy and it was just nagging at me. So when I was around 30 years old, it seemed like a good last moment, at least it seemed like the last moment at the time, where I could make a big change. So I sold my house in Tennessee, quit my job with Loretta Lynn and moved to Brooklyn in 1986."

Feldman still has occasional sideman gigs with guitarist John Abercrombie and he's performed as a soloist for orchestras nationally and internationally. Courvoisier can be found playing various groups or leading her own - one highlight is 2003's 'Abaton,' which features Feldman and cellist Erik Friedlander. Both with several albums to their credit, Courvoisier and Feldman are active in New York City's downtown jazz scene, often playing in the ensembles John Zorn organizes - Feldman is a regular in Zorn's Masada String Trio, and both he and Courvoisier perform as a duo for the entirety of 2006's 'Malphas: Book of Angels, Vol. 3,' which featured Zorn's compositions.

Most recently, the pair have returned with an excellent pair of albums: an album titled 'Oblivia' (their fourth as a duo) and a quartet album called 'To Fly to Steal,' which is a newer group that also includes bassist Thomas Morgan and drummer Gerry Hemingway. When asked about the difference between the two recordings, Courvoisier answers with a dry sense of understatement: “There are two other people," she says with a laugh.

Though her free-flowing playing ranges from muscular to angular, Courvoisier tends to hang back when she speaks. Feldman, on the other hand, is downright chatty. Picking up the question where Courvoisier left it, he adds, “In the quartet setting, it's not a negative thing, but we lose control. In the duo setting, we have 100 percent control over every aspect of where the music is going to go.

“The duo tends to happen naturally, but in the quartet we tend to try and take up less space," he adds. “Sometimes in the quartet, Sylvie and I will run tactics between us and the others don't even know it and then they are forced to respond. We have ways of playing and little signals. All the subtleties we developed as a duo over so many years still exist in the quartet, even if the others aren't aware of a strategy we are using between the two of us."

Take the Courvoisier composition 'Messiaenesque,' for instance. It appears on both albums. The quartet version is twice as long as the duo version. Arriving with a crash, it's messier, with the drums anchoring the tune to a polyrhythmic foundation. The duo version, on the other hand, floats in the air as shards of the piano melody slash and the violin soars over the top in counterpoint. The two compleiment each other's playing while at the same time finding different nuances as they move through the tune.

With improvised music, collaborations, by necessity, take on a conversational tone as players act and react. No doubt Courvoisier and Feldman's music is an extension of the two musicians' lives and their life together, but it almost didn't happen that way. Even though the two had began to play together, Courvoisier had a (some would say sensible) no-dating-musicians policy when they met, but Feldman wooed her with his sense of humor. “I said, 'You call me a musician? This s--- I'm doing?' And that kind of won her over. They aren't used to self-depreciating humor, being European."


Here's what our friends at All About Jazz have been up to:

ARTICLES
WWOZ: Thirty Years of “Bringing New Orleans Music to the Universe"
My Best Jazz Experiences Through the Decades

NEWS
All About Jazz Launches shop.allaboutjazz.com

This story appears courtesy of All About Jazz @ Spinner.
Copyright © 2021. All rights reserved.

For interview requests or more information contact All About Jazz @ Spinner.