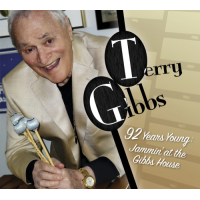 slideshow
One of the giants of the jazz vibraphone has just released a fabulous new album—92 Years Young: Jammin' at the Gibbs House (Whaling Cit Sound). It's a stone-cold swinging killer. Every single track on here is out-of-control great, proving that true beauty never ages.

Gibbs's recording career goes back to 1946, when he waxed 78s with Aaron Sachs' Manor Re-bops, featuring Tiny Kahn on drums. For the next 71 years, Gibbs has played and recorded with virtually everyone of note. What has always set Gibbs apart is his high-octane energy and gorgeous sense of time. Like the late bassist Chubby Jackson, Gibbs has always had a wonderful, hip sense of humor and a pure-gut sense of what sounds amazing. As soon as you hear Gibbs's maillots come down on the vibes' steel keys, you know your ears are in great hands. There's never any fat or chopped lived with Gibbs.

Among Gibbs's career highlights are his years in Woody Herman's Third Herd; the new Benny Goodman Sextet in the early 1950s; the Terry Gibbs Quartet with pianist Terry Pollard in the mid-'50s; all of his big band albums, particularly his Dream Band of the late 1950s and his many albums with Buddy DeFranco. And when Gibbs called his orchestra the Dream Band, here's what he meant:

That was his live recording at Hollywood's “Seville" in March 1959. There were around six albums in all.

Gibbs's new quartet album features John Campbell on piano, Mike Gurrola on bass and son Gerry Gibbs on drums. It's a perfect ensemble. Campbell's swinging, elegant keyboard fires up Gibbs while Gerry keeps superb time and Gurolla plays a smart, solid upright. Age is meaningless when you listen to Gibbs. The guy sounds as if he's 40 years old on here. Which isn't bad considering he retired nearly two years ago.

Here's how Gibbs ran the recording session, from his liner notes for the album:

“We played some, went out back by the pool, had some sandwiches, told stories and laughed, came back and recorded a few more songs. We did this for four days and recorded 32 songs. No playbacks. I would ask about a song and we would play. All in one take. It was really an old fashioned jam session. By the third day, we actually had a band that I wish I was young enough to travel and play with."