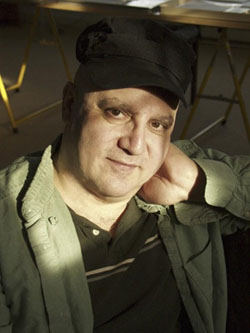 The first trio recording of eleven new compositions by Marx, Siegel and Esposito, former members of Second Sight. “The music on Inyo started as a series of melodic sketches. Everything else - the harmony, the rhythmic interpretation and the overall shape of the pieces - was improvised." --John Esposito

“Experiment with form lies at the heart of everything pianist John Esposito plays or composes... unites unlikely opposites... the sound on the album could best be described as unquiet meditations or chaotic lyricism... a true moment of musical Zen created by three masterful musicians." --Jakob Baekgaard, All About Jazz

“...the superb sound and strong focused playing make this a most compelling offering... What I dig about this is the way all three players interact and give each other some space to deal with at the same time. The music breathes and feels natural with some brilliant moments that consistently emerge... The endless inventiveness of this trio is most impressive and this disc remains a jewel in more ways than one." --Bruce Lee Gallanter, Downtown Music Gallery

This debut cd by the alto and tenor saxophone virtuoso Mitch Kessler brings to light a little known but highly developed instrumental and compositional voice. 8 originals by this prolific composer draw on his arsenal of Post Dolphy/Coltrane, Free Jazz, Early 20th Century German Expressionism, and the Blues.

“...The interplay between the tenor and the drums is just unbelievable. In a more perfect world, this disc would be played constantly on WBGO so that it had a chance to be heard and bought by the jazz-loving masses." --Bruce Lee Gallanter, Downtown Music Gallery

“A brilliant beginning, and one to hopefully be followed soon with more great studio work by Kessler." --Peter Aaron, Roll Magazine

“It is hard to tell that the music was recorded in the 1980s. It has a timeless quality about it that stands above the somewhat conservative area in which it was created." --Jakob Baekgaard, All About Jazz

“This is John Esposito's fifth disc on his own Sunjump label and each one has been another undiscovered gem ripe for the plucking. Do not miss out on these delectable hidden treasures!" - Bruce Lee Gallanter, Downtown Music Gallery

“...a lengthy suite-like performance that alternates accordingly between sections of delicate interplay and cacophonous improvisation...quite impressive...It unfolds like a ceremony and as such is quite an accomplishment." --Tim Niland, Jazz and Blues Blogspot

“Sangeeta is a very fine, fresh player, one of the few musicians who extend the tradition of the jazz guitar. He is a free musician with a lyrical and melodic approach." --John Abercrombie

“Sangeeta is a great and unique guitar player." --John Scofield

“I've known Sangeeta all my life and he's always been his own man. He's been experimenting with music his own way since he first started. I find him to be a true original." --Joe Diorio

“Berardi may have the most distinctive guitar voice out there... nobody like him." --Dan McClenaghan, All About Jazz

“... dark-toned electric musings ... might serve as a good antidote for listlessness or general malaise." --Glenn Astarita, All About Jazz

“... a roiling powerhouse of frenetic hard-bop... swings like mad and bubbles over with lively, effervescent chops to spare. And even better, instead of just cloning the achievements of the past, they can put their own twisty little spins on it." --Gene Santoro, Pulse! 1987

“... a young group that has shown signs of working some intriguing personal variations of Blue Note classicism of the mid-60's." --Robert Palmer, New York Times 1987

“Excellent solo playing and ensemble playing. It is gratifying to hear some young guys playing straight ahead Jazz with the caliber of musicianship that these guys have. The original compositions are worthy of much merit also." --Horace Silver

“...jazz that pushes off the timeline, sounding as fresh as ever." --Warren Allen, All About Jazz

“... the egoless ecstatic approach to small group Jazz. The Blue People, with great depth of feeling and boundless rhythmic energy, is an excellent date, very nicely recorded, and a fine complement to the trio session." --Stuart Kremsky, Cadence 2006

“...recasts a stack of familiar songs and adapts them for his own purposes... “Blue Marlin Road" is both familiar and foreign at the same time, a feeling that occurs again and again as Esposito touches on bits of the known en route to his own music". --Stuart Kremsky, Cadence 2006

“...extended harmonic reharmonizations and novel approaches... an interesting approach to the pieces all jazz musicians grow up learning... highly recommended to students of the art." --Thomas R. Erdmann, jazzreview.com 2006

“a keen sense of rediscovery and freshness... The wit, wisdom and downright sarcasm of Esposito is startling, and a talent to behold throughout this project... a virtuosity seldom heard in players interpreting jazz standards. A bold conception and execution to be sure, and with band mates that can hold up their end quite well, this recording is hopefully one of many to come from a brilliant player who deserves wider attention." --Michael G. Nastos, All Music Guide 2006

“Esposito and his trio have taken the jazz cover a step beyond, creating something unique and personal in the process, and seem to be having fun doing it... the interplay is effortless and satisfyingly dynamic. The old songs get a quality makeover here; only a major snob would disapprove." --M.R.Smith, Roll Magazine 2006

For more information about John Esposito and Sunjump Records visit our website.