Storybook - Music CD Release: Dreams Are Made For Children

A selection of timeless jazz dream songs by Ella Fitzgerald, Sarah Vaughan, and Billie Holiday, amongst others, that will lull babies into a sweet, blissful sleep. 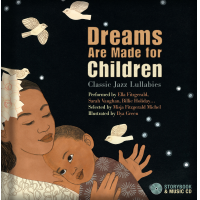 slideshow
Sometimes, a little jazz is all you need for a good night’s rest! Adding to their growing catalog of award-winning storybooks with CDs for children, The Secret Mountain will release Dreams Are Made for Children on October 1, 2015. It features twelve popular standards from the golden age of jazz recorded by singing legends Ella Fitzgerald, Billie Holiday, Nat King Cole, Sarah Vaughan and Chet Baker, amongst others.

Misja Fitzgerald Michel went to the National Conservatory of Music in Paris. He then studied at the New School in New York with Jim Hall and Kenny Werner. He began playing at the same time with Ravi Coltrane and many other musicians from the young New York scene. His first album, Live at The Villa, recorded in 1998, featured Scott Colley and Tony Rabeson. More recently, he released a tribute album to English cult bard Nick Drake, entitled Time of No Reply. He has performed at the Montreux Jazz Festival and the Montreal Jazz Festival. He lives in Paris, France.

Ilya Green grew up in the South of France. After studying fine arts, she began writing and illustrating books for established publishers like Didier Jeunesse and L'Atelier du Poisson Soluble. She is an active member of the visual artist collective Atelier Venture based in Marseille. She lives in Montpellier, France.

The Secret Mountain offers a varied collection of storybooks and enhanced e-books with music. Earlier this year, the Montreal-based publisher released two other books-CD combos, both of which have just won awards from the National Parenting Publications of America: Sleep Softly: Classical Lullabies by Brahms, Schubert, Satie, Debussy..." (music performed and recorded in France by L’Ensemble Agora), and Tomorrow Is a Chance To Start Over, by Vancouver artist Hilary Grist.