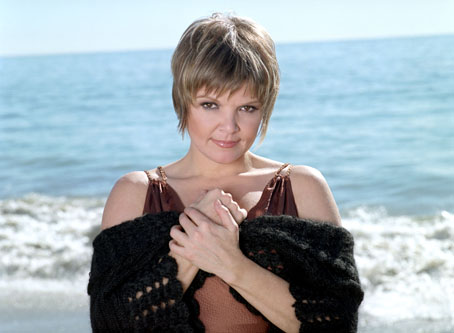 slideshow
This week, let's check out some videos featuring Karrin Allyson, who returns to St. Louis next week to perform on Wednesday, November 11 and Thursday, November 12 at Jazz at the Bistro.

Allyson, a Kansas City native now based in NYC, was a favorite of Jazz at the Bistro founder Barbara Rose, and performed here a number of times in the late 1990s and early 2000s. Her visits grew somewhat less frequent once she moved east, and it's been more than seven years since her last gig at the Bistro in May 2008.

Fast forward to Fall 2015, and Allyson is touring in support of a new album, Many a New Day: Karrin Allyson sings Rodgers and Hammerstein, in which she interprets songs from the team who created the music for Broadway hits including Oklahoma!, Carousel, South Pacific, and The Sound of Music.

Though no live videos of Allyson singing material from Many A New Day seem to have made it online yet, at the top of this post you can see a complete episode of Voice of America's program Beyond Category from September of last year, in which Allyson talks about her life and development as a jazz musician and performs some songs.

Also, last week while performing at Jazz Alley in Seattle, Allyson visited the studios of radio station KPLU, where she performed and was interviewed about the album by host Dick Stein.

After the jump, you can check out more songs Allyson recorded during previous visits to the KPLU studios, starting with “O Pato" and “Spooky," both from Halloween 2014 and featuring bassist Jeff Johnson and guitarist Rod Fleeman.

Below that, there's a version of “Smile" with Fleeman from 2011; “Blues In B Flat" with Johnson from 2013; and a medley of “I Want To Be Happy" and “What A Little Moonlight Can Do," recorded in 2012 as a duet with drummer Todd Strait.

For more about Many A New Day, you can check out the promotional video for the album from record label Motema Music, and read reviews from Jazz Times magazine and the blog Rifftides, plus the New York Times' review of a recent live show by Allyson.