'Sammy' at the Old Globe 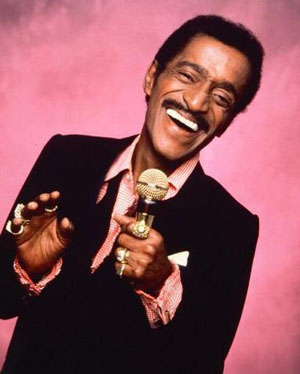 slideshow
His shoulders are slumped from too many gigs, too many drugs and way too many women. The bags around his eyes droop nearly to the bottom of his cocktail glass. His whole body is haloed in the cigarette smoke that would contribute to his death from throat cancer at 64.

As channeled by Obba Babatund, Sammy Davis Jr. finally concedes to the exhaustion that hes been postponing since his days as an adorable child dancer working the vaudeville circuit with his dad. The moment comes fairly late in the second act of Sammy, the appreciative bio-musical written by Oscar- and Grammy-winner Leslie Bricusse and directed by Keith Glover, which had its world premiere Friday at San Diegos Old Globe. But when it arrives it has the weight of an irrefutable showbiz truth.

Unfortunately, its a case of too little too late for the show, which mixes eager-to-please revue numbers with variety show sketches summarizing the high and low chapters from this triple-threat entertainer's life. The musicals book, to give you a sense of the subtlety involved, might as well have been printed in neon, though Davis (never one for skimping on style) would no doubt have preferred gold leaf.

Scenes appear and vanish relatively quickly, with each biographical segment attempting to top the previous one. These blasts from the past have only scant interest in burrowing beneath the surface. But theyre enlivened by Bricusse's music, much of which is new, though some is borrowed from his impressive catalog with Anthony Newley, which supplied their friend Davis with some of his most memorable hits, including “Who Can I Turn To?" and “The Candy Man."

Davis Harlem childhood is captured through the tussle between his grandmother (and surrogate mother), Rosa (a rousing if not maximally employed Ann Duquesnay), who thinks her grandson should be sent to school, and his father Sammy Davis Sr (Ted Louis Levy), a professional dancer who wants him to join his act. The number Another Hot Day in Harlem sets the locale and Keith Youngs choreography gives it a swanky lift-off, but the storytelling, which isnt really interested in probing conflicts, falls flat.

It's a tough road for young Davis, but the gigs draw attention to him, and a fateful early meeting with Frank Sinatra (Adam James) eventually blossoms into a career-boosting friendship. Then theres a stint in the military, where racism (clumsily) rears its ugly head, followed by Davis conversion to Judaism. This latter development is presaged by a scene in which Eddie Cantor (Perry Ojeda), Uncle Eddie from the vaudeville circuit, gives Samela a Mezuzah.

The car accident that cost Davis an eye is understood as a metaphor for the reckless behavior that was the downside to his manic ambition. This theme is traced throughout his compulsive dalliances, which helped derail his second marriage to Swedish actress May Britt (Heather Ayers). And this self-destructiveness is supremely evident in the all-night carousing with his fellow Rat Packers as well as in his prodigal spending on a luxurious wardrobe that even his Vegas buddies found excessive.