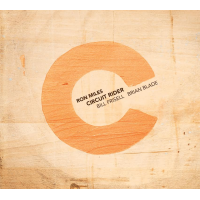 “I like to think that musicians are the messengers of today,” explains Ron Miles. Known for writing songs that possess religious overtones, Miles embarked on this new album with the Circuit Riders of old serving as his inspiration. The Circuit Riders, traveling clergy who took the gospel to remote corners of America’s frontier on horseback beginning 250 years ago, were forerunners in their day. According to Miles, Circuit Rider is a post-modern nod to these leaders who lived for a cause greater than themselves. “We, as musicians, are traveling Circuit Riders preaching every day at any place available and are always on the move.”

Comprising five original compositions on this eight-track disc, Circuit Rider marks the first time Miles recorded an album with the same group twice. This time around, Miles could hear the band in the songwriting process. “We discovered songs together,” says Miles. “Their astounding capacity for playing impacted how I approached the music. When you have musicians as perceptive and responsive as Bill Frisell and Brian Blade, the music just takes off!”

Sharing a fondness for striking melody, musical economy, and the importance of individual timbre, these three genre-defying musical masters are highly respected leaders with expansive discographies and projects covering a wide spectrum of contemporary music. Their collective playing reflects the landscape that is implicit in Circuit Rider; all three giving a certain folk-like context to Ron’s original compositions. Denver-based Ron Miles and Bill Frisell (a partnership that dates back to the mid-90s) both exude the Old West, while Brian Blade’s breezy sophistication and jagged rhythms salute his native Louisiana.

Like its predecessor Quiver, Circuit Rider showcases a selection of carefully chosen cover songs. Synthesizing the past are rearrangements of Jimmy Giuffre’s “Two Kinds of Blues,” as well as both “Jive Five Floor Four,” and “Reincarnation Of A Lovebird” by the trio’s hero Charles Mingus. Producer Hans Wendl and engineer Colin Bricker ensure again that the recording quality do justice to the high level of the musical performances.

Ron Miles is a songwriter and cornet player based in Denver, Colorado. Ron was born in Indianapolis, Indiana in 1963 and moved to Denver with his family in 1974. Ron Miles has previously recorded as a leader for the Prolific, Capri, Gramavision, and Sterling Circle labels. He is one of the finest improvisers and composers of his generation and has been called one of the greatest melodists by clarinetist Ben Goldberg. In addition to leading his own bands, Ron Miles has performed in the ensembles of Bill Frisell, Mercer Ellington, Don Byron, Myra Melford, Joe Henry, Madeleine Peyroux, Jason Moran, Matt Wilson, the Bad Plus, Harriet Tubman, Ginger Baker, and Goldberg.