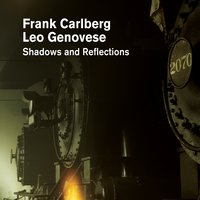 Brooklyn-based Red Piano Records is proud to announce the release of Shadows and Reflections from pianists/composers Frank Carlberg and Leo Genovese. The recording sessions for this album came about in an atmosphere of friendship, common musical interests, and in anticipation of great fun. Carlberg (also a partner in Red Piano Records) commented, “I've known Leo for many years and have always admired his playing and attitude. Playing with him is very easy and always fun!" Genovese added, “Frank Carlberg is one of my favorite players and composers. I learned so much music when I had the chance many years ago to study with him at Berklee, and every time I hear him play I learn lots of music."

Genovese and Carlberg are two artists who possess very open personalities that embrace everything around them. “The session was so fun and deep as we got a chance to play music from our hearts and to be able to reach higher spiritual ground through the act of listening and playing together," said Genovese. Carlberg added that, “Leo radiates positivity and helps make others reach further. This for me was very inspiring; and when the inspiration threatened to run out we had some claret libations from Mendoza and Patagonia to help steer us right back in to the playing. It is simply so much fun to play with Leo!"

The duo entered into the studio with the notion to accept whatever was happening in the moment, and not impose an agenda or specific direction for the music. “We had not really even decided what instruments we were going to play but made impulsive decisions about that as the session unfolded," said Carlberg. The repertoire was dominated by their mutual interest and love of Monk. “Playing Monk together was like speaking about an old friend while still learning new things about him. A truly exhilarating experience! Both Leo and I seem to have maybe a somewhat cinematic bent to our music so I had also sketched out a few things for us to elaborate on that I suspected would take us on little journeys. Finally, there was the music of the Argentine songwriter Cuchi Leguizamón. Leo knows many of Cuchi's songs while I know only a couple so we decided to play Zamba Para La Viuda, a song that I learned through my association with the great Argentine singer Roxana Amed. Leo helped me see facets of this song that I could only have dreamed of before," said Carlberg.

“Recording Shadows and Reflections was a truly delightful experience and I am grateful to Leo for sharing this music with me." —Frank Carlberg

“I feel so happy and honored to be able to explore sound and textures with Frank in this setting of piano, electric piano and organs. The recording was a very magical night. With a little malbec friend, we became music and sound." —Leo Genovese

Originally a native of Helsinki, Finland, Frank Carlberg has carved himself quite a niche in the New York City jazz community. As a leader, he has released almost twenty albums, and his groups include the Frank Carlberg Quintet (performing settings of a wide variety of texts including poetry), the Tivoli Trio (a classic jazz piano trio playing an eclectic mix of Carlberg's compositions drawn from cinematic and circus inspirations), and the Frank Carlberg Big Band (performing original compositions as well as arrangements and re-compositions of standards and folk materials), Monk Dreams, Hallucinations and Nightmares (a large ensemble project with the music of Monk as its central source both in terms of reinterpretations of Monk's music and inspiration for new original compositions), as well as recent collaborations with Argentine vocalist Roxana Amed, and the Dutch Clazz Ensemble.

In addition to his own bands, the Brooklyn-based pianist has been involved in many crossover projects throughout the years, and some of his most notable collaborations have included performances and recordings with the likes of saxophonist Steve Lacy, trombonist Bob Brookmeyer and trumpeter Kenny Wheeler. Carlberg has been commissioned to compose music for big bands, small ensembles, symphony orchestras as well as modern dance companies. In addition to his playing and composing activities the pianist also serves on the faculty at the New England Conservatory. He is also a member of the Douglass Street Music Collective and a partner in Red Piano Records, an artist run cooperative label in Brooklyn, NY.

Early on Carlberg came under the influence of jazz masters such as Paul Bley, Ran Blake, Geri Allen and Jimmy Giuffre. The music and thinking of these musicians had a profound impact on Carlberg and set him on a path in search of a personal expression.

Leo Genovese was born in Argentina in the farmlands of Venado Tuerto, Argentina. His first encounters with music and freedom where in the Genovese family band, where the spectrum of sonic possibilities is as wide you want to imagine and without limits, if you wish. Leo was, and is, a student of music in history, ecology, politics and economics around the clock and around the world. Genovese went on to study at the Berklee College of Music where he learned from masters such as Hal Crook, Frank Carlberg and Danilo Perez. He has also had the opportunity to make some noise and go crazy with some amazing people on the scene today, such as Esperanza Spalding, Wayne Shorter, Jack DeJohnette, Milton Nascimento, Herbie Hancock and many others.