When Andreas plays, all you can do is listen, because you are simply left without words. —Quincy Jones 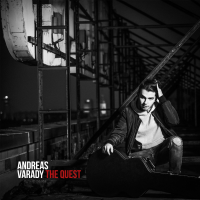 slideshow
The Quest is the long-awaited third album from Andreas Varady, a protégé of the legendary Quincy Jones!

Resonance Records is proud to announce the release of The Quest, the third recording from twenty-year old guitar virtuoso, Andreas Varady. With the release of Questions (2010) and his eponymous CD in 2014, the native of Slovakia, and resident of Ireland, emerged from thin air and put the guitar playing world on notice that there was a new force on the instrument to be reckoned with. On The Quest, Varady's artistry has reached new heights, and it's staggering to behold. His unadulterated command of the guitar, his highly-developed skills as a composer, his rhythmic facility (which speaks volumes about his roots in Gypsy music), and his ability to craft an astonishing flow of single-note lines while traversing chord changes, all by ear, has attracted the attention of many legends of this music, not the least of which is Varady's mentor, manager, producer and friend, the esteemed Quincy Jones. The Quest, available on April 6, 2018, features Varady in the company of his father Bandi on bass, younger brother Adrian on drums, fellow Slovak Radovan Tariska on alto saxophone, and Venezuelan native (and current New York City resident) Benito Gonzalez on piano.

At just twenty, Varady has already performed at major festivals and venues around the world. The next exciting new chapter in the journey of this uber- talented musician begins with the release of The Quest. Varady has expressed that this album, comprised of all original music, feels very much like his first fully realized artistic statement, and indeed it showcases Varady's evolution from child prodigy to consummate artist, one with an abundance of fresh, bold energy. “I feel like I'm giving you a piece of me on this album," said Varady. The album title, which also reads like a mission statement is, “about this whole quest that I'm on in music- seeking cool things, playing cool music in cool places, enjoying it all and having fun and doing what you wanna do," said Varady. The album is also his debut release on the boutique non-profit jazz label, Resonance Records, which signals a departure from his self-titled major label debut on Verve in 2014. Two other Quincy Jones protégés, Justin Kauflin and Alfredo Rodriguez, will also be releasing new albums in 2018.

Resonance EVP/GM (and executive producer on The Quest) Zev Feldman said about first hearing Varady, “Upon first listen, I was struck by his talent and artistry. Then getting a chance to meet him in Ireland, and spending some time talking with him, he just fits the mold of what Resonance is all about in terms of promoting younger artists and sharing their music. We're very happy to have him on the label. It's also a great honor to work with Quincy Jones and his team, and partnering with them to get Andreas' music out there is something we're very proud of. Resonance believes strongly in living artists also, not just those from a bygone era, and it's going to be very exciting to continue to watch him develop and we're thrilled to be able to add a chapter to his legacy on our label." Varady has many influences. As expected, guitarists such as George Benson, Django Reinhardt, Kurt Rosenwinkel and Peter Bernstein have greatly impacted his playing, but Varady explains, “I've always been obsessed with saxophone players. I get as much influence listening to John Coltrane as I get from guitar players. But at the end of the day, I could list every musician that I've ever listened to as an influence. I act like a sponge that way. Whatever I listen to I always pick up some things, no matter if it's Radiohead or A Tribe Called Quest or Trane. It can be from hip-hop to rock and jazz...everything kind of all inspires me and influences me."

A child prodigy of Hungarian Roma descent, Varady picked up guitar at age four and quickly revealed his uncommon gift, learning Kenny Dorham's “Blue Bossa" by ear. At age nine, he moved with his family to Ireland and by age 11, having already absorbed the influences of George Benson and Django Reinhardt, he began busking with his father on the streets of Limerick and Cork. Gigs around Ireland soon followed, mainly with drummer-producer David Lyttle, who produced Varady's first album, 2010's Questions. In 2011, at age 13, Andreas appeared with guitar master Martin Taylor at the Inishowen International Guitar Festival in Culdaff and later that year became the youngest headlining artist at Ronnie Scott's Jazz Club in London. Invited to play at the 2012 Montreux Jazz Festival by founder Claude Nobs, he performed for and met Quincy Jones, who signed him to his management company. He was signed to Verve Records in 2013 and his stateside debut, executive produced by David Foster and Quincy Jones and produced by Toto's David Paich, featured guest appearances from singer Gregory Porter and trumpeter Roy Hargrove.

More about the music on The Quest:

(with excerpts from the album's liner notes by Bill Milkowski)

The opener on The Quest, “Lost Memories," serves as a kind of mini-overture as Varady unleashes a fusillade of notes over the engaging theme. Up next is the dynamic “Radio Joint" establishing the flexible group chemistry while also showcasing urgent solos from Varady and Tariska over a driving 12/8 groove. Gonzalez pushes the envelope in his harmonically probing solo here, which is fueled by Adrian's intense, whirlwind attack around the kit. “He's in a huge growing place right now," says Varady of his younger brother. “He has this kind of ballsy playing style that I felt was the right thing for the tunes on this album." The 15-year-old further showcases his considerable drumming skills on the modal “Follow Me," which culminates in a kinetic call-and-response between the brothers. (By the way, that's Andreas playing double bass on the hip-hop flavored tag).

Varady combines speed and finesse combine on the driving 6/8 composition, “The Time Is Now" and utilizes some Frisellian backwards guitar effects on the evocative interlude “Patience." The adventurous title track is a centerpiece for this compelling album. Opening with a rubato free section that has Gonzalez playing inside the piano while his band mates add provocative colors and textures, it resolves to a buoyant theme with Andreas and Radovan tied together in tight unisons while navigating a tricky time-shifting terrain. “He's a great player," says Varady of the Slovakian saxophonist, “and I like his strong, darker sound."

The guitarist shows his urbane side on “Story" and the uplifting, melodic number “Her Dream." Then he swings unabashedly on the up-tempo “Radiska," a burner that also turns Tariska loose and has Gonzalez channeling his inner McCoy Tyner. “His soloing is swinging and very interactive," says Varady of the gifted pianist, who turns in a monstrous solo here. “That's the thing with all of us...we're very interactive on the album. No one is told, 'You do this, you do that.' It's more of a sketch and then see where it goes from there. So it was a natural process. This album was really open, like pure jazz...straight in the moment. That's what I was going for."

The closer, “Outro," featuring more backwards effects over a simple, serene melody, serves as a bridge to what Varady plans to explore in more depth on his next recording. “I thought it would be interesting to just add some of the elements that would be for my upcoming music," he explains. “I'm into a lot of electronic music, I'm into a lot of hip-hop. That's also a part of me, and I thought it would be cool to add that color to the album. It's almost like my one foot is solidly in jazz and on my other foot, my toes are in something else. And it's not like I'm crossing genres, it's more of like going from one of my styles to this other style and merging it all together to create this ultimate thing."