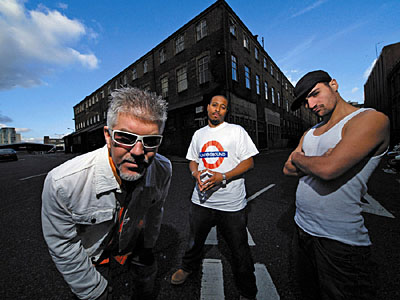 London, UK--The seventh album from producer Geoff Wilkinson’s hip-hop-jazz crew Us3 sees the introduction of two new young MCs hot off the streets of New York. Underground hip-hop fans will already know the name of 23 year-old Sene, and spoken word aficionados will certainly be aware of 20 year-old Brook Yung. “These are the youngest vocalists I've featured since the guys on “Hand on the Torch" says Geoff, “and it’s definitely given the album more of a hip-hop bite."

From the gritty opener “Gotta Get Out Of Here" to the bossa nova club track “She's With Me," the album touches on tales of urban paranoia and desperation, to the pursuit of true romance. Although Us3 are known for having a diverse range of influences, the most surprising tracks are those that feature a more stripped down production approach. “You Already Know" is completely made of vocal samples, and “Turn It Up" utilizes only drums and synthesized bleeps (jazz crunk?).

The hard electronics of “The Future Ain’t What It Once Was" & moody piano-led “Got To Make A Livin’" resonate with the current economic crisis, and Brook Yung’s gorgeous tale of attraction in “The Love Of My Life" is perfectly complimented by the lush piano & shuffling drums. A strong latin influence is prevalent in both the vibes led party track “Can I Get It?," and the seductive sleazy horns of “I Let 'Em Know," while the unusual time signature of “Who Got Next?" has Sene effortlessly wrapping his twisting lyrical wordplay around a funky 4/4/3/4 groove.

Collaborators from the jazz side include the familiar notable faces of Ed Jones (sax), Bryan Corbett (trumpet), Chris Storr (trumpet), and John Crawford (piano), while top turntablist DJ First Rate scratches up a storm. Everyone will relate to something here.

Geoff sums up the album title: “In life sometimes you need to stop and think about what you are doing and what you really want to do. And when you’ve identified what that is, run towards it”.

In 2008 Sene released an album entitled Elevator Music, a collection of previously released 12"s, and this year will see the release of his much anticipated collaboration with hot LA rapper/producer Blu, “A Day Late And A Dollar Short."

Brook Yung is already a rising star on the US spoken word circuit. Last year he won 1st place in LA’s Adult Poetry Slam and 1st place in the NYC Urban Word Youth Slam. He is currently a member of NYC’s Urban Word Team, and performed alongside Wyclef at the 2009 Sundance Film Festival.

The 8-piece Us3 live band will be supporting the album release with a 21 date European club tour in April, with appearances at festivals throughout summer.