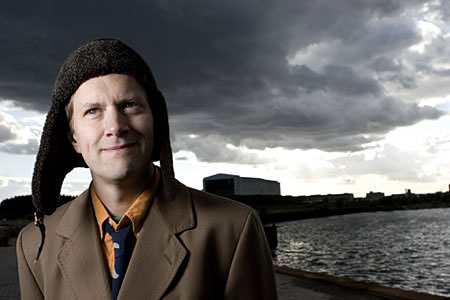 It has long been Bates's intention to complete the series with a spring-themed album, and in June, 2008 he finally did so with Spring Is Here (Shall We Dance?) (Lost Marble, 2008). It's made with the 19-piece StoRMChaser, the post-graduate big band at Denmark's Rhythmic Music Conservatory (RMC), where Bates was appointed Professor of Rhythmic Music in 2005. A rich and riotous recalibration of orchestral jazz, in the tradition of Bates's work with Loose Tubes in the 1980s and Delightful Precipice in the 1990s, it's a defining masterpiece in his already distinguished big band discography.

Bates currently spends half his time in Copenhagen at the RMC, and the other half in London. AAJ Senior Editor Chris May spoke with Bates in London in late May, 2008, on a spring day during which the rain came down hard without a break for about eight hours. The precipitation reminded Bates of a journey he made to the Balkans as a child in the late 1960s, which he feels had a lasting influence on his music.

Despite the weather, it was a sunny meeting, with Bates speaking eloquently about the new album, StoRMChaser, his interest in writing for the human voice, and what he's trying to do with his music.

Check out Django Bates: Spring Is Here (A Long Time Coming But Worth The Wait) at AAJ today!