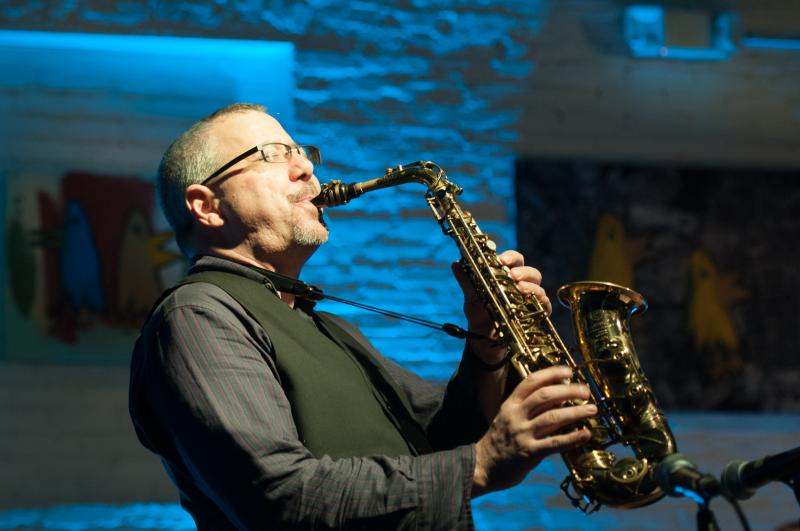 New World Records proudly announces the release of A Trumpet in the Morning, the new recording from saxophonist/composer Marty Ehrlich, and the first documentation devoted to the stalwart NYC artist's large ensemble compositions. A Trumpet in the Morning (named for a poem by Arthur Brown, 1948-1982) is a tour-de-force, showcasing the best of Ehrlich's many metieres that have marked his success as an instrumentalist, composer and bandleader for more than three decades. Strong melodic invention prevails alongside a keen ear for instrumental color, a multi-genre, multi-disciplinary approach, and, “an unblinking yet ultimately affirmative insistence on connecting his music with realities both historic and contemporary", said noted writer Bob Blumenthal (from the album's liner notes).

Marty Ehrlich, born in St. Paul, Minnesota on May 31, 1955, raised in Louisville, Kentucky and St. Louis, Missouri, and residing in New York City since 1978, is in the midst of celebrating thirty-five years of distinguished work at the epicenter of creative and improvised music. In many ways, these years of cultivating his creativity and individuality has led Mr. Ehrlich to the creation of A Trumpet in the Morning. Bob Blumenthal explains, “His family moved to University City, Missouri, a suburb in the process of becoming St. Louis' first multi-racial community, rich with artists and progressive political thought. The environment was ideal for nurturing Ehrlich's creative talents, and as a teenager he began writing poetry and continued clarinet studies with members of the St. Louis Symphony. A weekend arts program brought him into contact with the musicians, painters and poets who formed the Black Artists Group (BAG), an interdisciplinary collective similar in intent to Chicago's Association for the Advancement of Creative Music (AACM). The influence of BAG members Julius Hemphill, Oliver Lake and J.D. Parran led Ehrlich to begin focusing on studying the saxophone and to immerse himself in both the traditions and the innovations of improvised music."

“One of the great things about meeting the BAG guys was being urged to learn the history of the music," Ehrlich emphasizes. “It made me much more of a polyglot." The encounter also instilled a philosophy that has informed all of his work. “I call myself a pan-stylist who doesn't believe in musical styles," he explains. “My inspirations are often conceptual rather than `styles' I'm trying to write in. I reject the notion, especially in jazz, that there is only one language to use, and my music is not a comment on style. I like the resonance of contrasting sections, and will use musical style for contrast, but from the inside."

Ehrlich graduated from the New England Conservatory of Music and hit the NYC scene running in the late seventies, with many bandleaders seaking him out for the uncommon range and consistency of his work on various clarinets, saxophones and flutes. He quickly became a valued member of ensembles led by AACM luminaries Muhal Richard Abrams, Anthony Braxton, Leroy Jenkins, Roscoe Mitchell and Wadada Leo Smith as well as his former teachers from The NEC, Jaki Byard and George Russell. Ehrlich found himself shoulder to shoulder with some of the period's most innovative figures, gaining valuable experience that provided insights into leading a large ensemble, which later influenced his approach to the music on A Trumpet in the Morning. Ehrlich has also composed extensively for his many small ensembles, such as Traveler's Tales, the Dark Woods Ensemble, Relativity (with Michael Formanek & Peter Erskine), C/D/E (with Mark Dresser & drummer Andrew Cyrille), Rites Quartet and The Marty Erhlich Sextet.

“A real difference between this recording and my previous albums is that I'm conducting and producing rather than playing," Ehrlich said. “This was partly practical, since there was a lot to get through in the studio, but it also seemed right for this music. On my first European tour, with Anthony Braxton in 1978, he just conducted, because he said the music needed someone outside of it to give it shape. George Russell and Muhal Richard Abrams are other great composers who also took this approach. Another thing that impressed me about Anthony on that first tour was how hard he listened to everybody else. I saw a similar role here: to listen and bring out certain things, to maximize the creativity in the room."

“Ehrlich has written pieces for larger ensembles including the New York Composers Orchestra, his most ambitious documented opus prior to the present collection was The Long View, created in 2000 in collaboration with painter Oliver Jackson. The various movements of that work were scored for between two and 14 musicians. Here, in contrast, the canvas remains large, though again it is mutable. Most of the twenty-four musicians involved have extensive histories with Ehrlich, who emphasizes that such personnel choices as the use of two rhythm sections were made, 'to enlist their individual approaches in giving the recording an even wider palette.' He also says that the recording realizes 'an inner compulsion to reveal the relationships among the pieces, the majority of which were written in the past decade and are long-form and multi-sectional. They share an intention, and are really my own music.' (from the album's liner notes by Bob Blumenthal)

About the music on A Trumpet in the Morning:

“Agbekor Translations" (2012) was written for collaboration between the Hampshire College Jazz Improvisers Orchestra, which Ehrlich directs, and the Mt. Holyoke College West African Drumming Ensemble. Ehrlich based the piece upon six interlocking rhythms from the agbekor dance performed by the Ewe people of Ghana. Each rhythm provided a basis for a melody, which Ehrlich then spread throughout the orchestra.

“A Trumpet in the Morning", commissioned by the Sound Vision Orchestra in 2004, is a setting of a poem by Arthur Brown (1947-1982) whose work was a seminal voice in the creative renaissance centered around the Black Artist Group of St. Louis, MO, where Ehrlich began his musical journey. “This musical work is written as a concerto for my long-time colleague J.D. Parran, who takes on the role of narrator and primary improviser (featured on soprano and bass saxophones). The music aims to refract the celebratory imagery of the poem, and to create a range of sound worlds for the poem to be read in," said Ehrlich. “Writing poetry made me want to be an artist even before I decided to pursue music," the artist emphasizes, “and I've been aware of this poem since I was quite young. I didn't know Arthur Brown-he wasn't a joiner, and never became part of the BAG-but I heard him read the poem once, and he was a good friend of J.D.'s. Some of my earliest musical experiences were playing to accompany poetry, roots I share with J.D. “

“Blues for Peace" is a Jazz Orchestra work that asks just that. It moves from a riff driven funk-rock, to an extended blues form in 9/8 rhythm, before returning to its opening feel, and a reflective conclusion. “Like several of my pieces, this is in the long tradition of taking the basic blues sensibility and stretching out the form in one way or another," Ehrlich says. “It didn't really work as part of the original `Rundowns,' but orchestrating it made all of the difference. The nine beats are counted 'Taki-Taki-Taki-Gamela' to use the helpful phrases Karl Berger teaches. “

“Rundowns and Turnbacks" takes a phrase used to describe Robert Johnson's guitar artistry, as a metaphor to look at possibilities in American life through a multi-stylistic musical prism. Each movement has a different orchestration, and each evokes themes both political and personal for Ehrlich.

“M Variations (Melody for Madeleine)" was originally composed for The New York Composer's Orchestra, and is the only piece on the recording not written in the last decade. It is in many ways a piano concerto, with composed sections for piano in the beginning, middle, and end of the piece. It reimagines a theme I wrote for my Traveler's Tales group, for my then young daughter. In this version, the melody is passed between the voices of the orchestra. Before the solo piano conclusion, the piece collages the melodic material over a circular bass line. Uri Caine is the dynamic interpreter and piano soloist here", said Ehrlich.