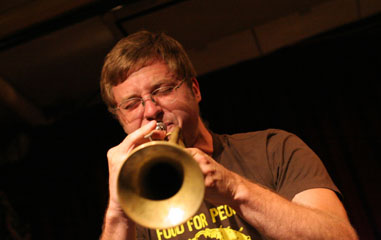 slideshow
Firehouse 12 Records is proud to announce the November 20th release of The Peter Evans Quartet's self-titled debut and Tyshawn Sorey's two-disc set, That/Not. These releases, recorded and produced by the label in its state-of-the-art recording studio in New Haven, Connecticut, are the first to document these acclaimed young artists at the helm of their own bands.

New York-based trumpeter/composer Peter Evans' first recording as a leader, The Peter Evans Quartet, introduces his group of the same name, featuring guitarist Brandon Seabrook, bassist Tom Blancarte and drummer Kevin Shea. Evans describes the band's music, which it has performed at the annual Festival of New Trumpet Music among many other prominent New York venues, as using “a combination of influences that are near and dear to the all the members of the group (the great recorded Jazz of the 50's and 60's, abrasive noise music, wild and kinetic free improvisation) to give the listener something searing, intense, and honest."

Trumpeter Peter Evans is an urgent new talent who promises to upend the world of jazz and Improv. If you had a lingering suspicion jazz might be dead, this furious and compelling release will calm your fears.
--Andy Hamilton, The Wire

The Peter Evans Quartet is not only a definitive statement from a rising new voice, but one of the finest jazz records of the year.
--Troy Collins, AllAboutJazz.com

New York drummer/pianist/composer Tyshawn Sorey steps out as a leader for the first time with That/Not, leaving behind his role as a drummer with some of the most respected names in creative music to document his own work as a composer and conceptualist. Sorey and the members of his year-old quartet, trombonist Ben Gerstein, pianist Corey Smythe and bassist Thomas Morgan, explore a wide range of pieces, both notated and freely improvised, on a collective journey that defies conventional notions of genre and perception.

“My objective with this music is to question who and why we are, to question the very nature of what it means to perceive something," Sorey explains. “The music here is our life and soul expressed in sound."

His debut That/Not further exposes the inner workings of a young musician with the ability to play in any context, but the boldness to do his own thing...this is music that is unconventional, blatant, and unique.
--Mark F. Turner, AllAboutJazz.com

One has to reach way back to Anthony Williams' Life Time to find a comparable album; just as easily as Williams, Sorey could have played it much safer, and still be perceived as being ahead of the curve. This is a major statement by an emerging artist poised to do great things.
--Bill Shoemaker, PointofDeparture.org

The pleasures of That/Not come when you surrender to Sorey's vision, when you're still surprised on the 6th and 7th listening, when you finally hear the patterns in the music.
--Richard Kamins, Hartford Courant