Mark Aanderud, Hernan Hecht And Stomu Takeishi As Molé Present A New Take On The Piano Trio With Their Highly Evocative "RGB" On RareNoiseRecords 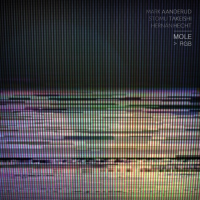 Freedom, experimentation and telepathy are the watch words for RGB, the latest transcendent collaboration of pianist-composer Mark Aanderud and drummer Hernan Hecht under their collective name of Molé. Joining the two longstanding partners on their second RareNoise outing is the inventive Japanese bassist and longtime New York resident Stomu Takeishi, whose highly expressive and adventurous low-end presence has graced albums by such forward-thinking, cutting-edge artists as saxophonist Henry Threadgill, cellist Erik Friedlander, trumpeter Cuong Vu, saxophonist Patrick Zimmerli, pianists Myra Melford and Satoko Fujii. The album will be released on December 8th and will be available on CD, vinyl and Hi-Res digital download. Together these three refined, deep-listening musicians strike a rare accord on pieces that range from meditative motifs to rhapsodic crescendos, from spacious, ECM-ish soundscapes to turbulent, collective jams.

It was nearly ten years ago that Mexican-born pianist-composer Mark Aanderud (now living in Prague) began playing with Argentinian drummer Hernan Hecht. Their chemistry was immediate and natural, eventually leading to the formation of Molé, a vehicle to explore their common interests. As Aanderud explained, “Hernan and I do have certain unspoken philosophies. We love sound, groove, freedom and songs. The first things we did were all related to free music, with electronic elements or not, but always with the idea of creating songs or forms in the moment. We do have some incredible magic going on, as much as we can play concerts or record without ever speaking of music, and never repeating ideas or stop developing. This actually hasn’t changed over the years.”

On RGB, with bassist Takeishi affecting the overall vibe with his intuitive genius, things opened up and became more conversational and telepathic in the process. “After What’s the Meaning?, it became very clear that the music we should continue doing had to go back to what we always did, and that was to experiment,” says Molé’s principal composer Aanderud. “And we always had Stomu in mind. We always loved his sound, his approach and concepts. He is unique artist. We couldn't think of anybody better for this, so we just decided to send him an email and invite him to do a tour and record. Once he said yes I started composing all the music thinking of the three of us. I wanted to do music that would be as open as possible but that would provide a rhythmic and structural base to start with. As you can imagine, Stomu absorbed and exceeded the music.”

From the meditative soundscape of “Sub-All” to the frantic funk of “Reasons,” fueled by Hecht’s slamming backbeats and Aanderud’s hyper piano solo, to the suite-like “Trichromatic,” which travels from an evocative rubato into to a free section in the middle which resolves to a lyrical theme, this edition of Molé is perhaps the most flexible and experimental of all. “Winip” opens with a hymn-like refrain before heading into a heavy-duty Bad Plus-like theme underscored by Hecht’s big-as-a-house backbeats. “Freelance” has Takeishi pushing the envelope with effects before soloing over a drum ‘n’ bass groove by Hecht while “Rodriguez” is Molé’s unique take on the classic Clyde Stubblefield-Jabo Starks funky drummer groove from classic James Brown bands of the ‘60s. The extremely spacious “T-Overlap” leads into some provocative collective improv while “Ine Sest” opens on a classical not with a piano etude by Aanderud before evolving into a whimsically tuneful number underscored by Hecht’s supple brushwork. And the closing three-way conversation on “Wix,” paced by an exacting and infectious 6/8 over 5/8 groove, is perhaps the best example of collective improvisation on the record.

“I had written eight songs for this record,” says Aanderud. “Some, like ‘Winip,’ ‘Reasons,’ ‘Wix’ and ‘Rodriguez’, had a lot of notes. So I thought I had to balance it and add some songs that would be easier and would provide an atmosphere for creating something. So I wrote other four songs — ‘Sub-All,’ ‘Ine Sest,’ ‘Freelance’ and a fourth one that became the ending part of ‘Winip.’ But for the recording I thought we should start playing something free, and that was ‘T-Overlap.’ I liked it so much that I proposed to do another free improvisation which became ‘Trichromatic.’ After that we just went on to do what was planned. There is a lot of experimenting in the music, but there is very precise stuff. There are no chords on this music. There is no structure for improvisation either. Some ideas are very chromatic with hard rhythms and others are just the simplest I could think of. But there was always a direction towards improvisation.”

Aanderud is also quick to point out, “I had some clear influences for writing this music. Tim Berne was one, Paul Motian another. I was also inspired by other bands like Aphex Twin, Massive Attack, Lamb or Sigur Ros and, of course, Cuong Vu, Peabody and many other bands that may be of inspiration.” While eight of the titles on RGB were composed by Aanderud, his kindred spirit Hecht is a key component in the band’s overall sound. “In this Molé project, Mark is the composer and I create opportunities for the music to thrive,” says the inventive and flexible drummer. “I’m involved in the creative process of interpreting the songs. In this environment, our aesthetics work together.” Adds Hecht, “I think we are part of a worldwide movement, a generational shift that has fewer stylistic prejudices. I am interested in music that is broad, not determined by a style. I like breadth of concepts and the possibility of being in infinite change, refreshing me, trying to find freedom for the child in me and permit manifestations to occur in music; a deep love of life and nature, a freshness to grow and advance in years, sure to shape a better person and hopefully help make this world a better place for everyone.”

In the company of the extraordinarily sensitive and expressive bassist Stomu Takeishi, Aanderud and Hecht make some startling sonic discoveries together on RGB.

ABOUT THE LABEL – RareNoiseRecords was founded in late 2008 by two Italians, guitarist/arranger/ producer Eraldo Bernocchi and all-round music nut Giacomo Bruzzo. Located in London, the label was created to present a platform to musicians and listeners alike who think beyond musical boundaries of genre. For further information and to listen please go to