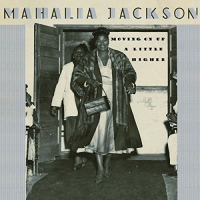 slideshow
In the 1950s, R&B and rock 'n' roll was aimed squarely at the bottom half of the body while gospel took care of the rest. Blues shouting came out of gospel in the 1940s. So did the passion and conviction of jazz solos and jazz vocals. In the world of gospel singing in the 1940s and '50s, the Queen of Pews was Mahalia Jackson. Born in New Orleans in 1911, Jackson single-highhandedly turned church singing into a high art, lifting the music with an earthy emotionalism, feverish conviction and operatic power that left the devout and secular listeners thunderstruck. By the 1960s, she was perhaps the world's best-known African-American singer and civil rights advocate.

As Anthony Heilbut writes in his superb liner notes to Mahalia Jackson: Moving on Up a Little Higher, a new album from Shanachie Records, “It was this combination of raw amateurism and a world-class voice that made her so appealing. Had she exhibited more vocal control, she might have seemed too grand or “seditty." Had her voice been less spectacular, she would have seemed just another gospel shouter." Heilbut, of course, is the author of The Gospel Sound: Good News and Bad Times (Anchor).

The new album features more than 20 previously unreleased recordings between 1946 and 1957, including material from two of her most important concerts—a 1951 symposium that introduced her to an integrated audience and the Sunday performance at the 1957 Newport Jazz Festival. There also are New York church performances and a hair-raising recording of her singing Before This Time Another Year in 1954.

This is listening music, the sound of soul before the word existed. I found myself transfixed by Jackson's performances, her elation and all-in vocal tones and feeling. She's also the fount every major soulful singer has channeled, from Dinah Washington and Aretha Franklin to Janis Joplin and Whitney Houston. In the case of each singer, Mahalia left her mark.