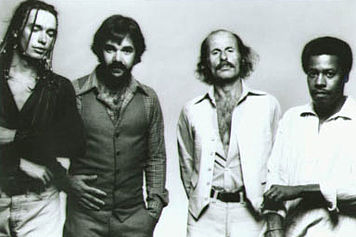 Seminal jazz group Weather Report rises again with the Weather Report Legacy Project and crowdfunding initiative. The new project, launching December 9, 2013, will support the creation of a documentary, “Calm Before the Storm." The film documents the group from its beginnings in 1970, through their 16 year and 17 album career, anchored by legendary founders and jazz legends Joe Zawinul and Wayne Shorter.

The Weather Report Legacy Project was created by Tony Zawinul, son of the late Joe Zawinul and head of the Zawinul Estate, as well as Weather Report co-founder Wayne Shorter. Tony will direct the upcoming documentary and brings unequaled access to the life and mind of his father Joe. Others involved in the project include former Weather Report members Peter Erskine, Alphonso Johnson, and Robert Thomas Jr. to name just a few.

Tony Zawinul noted, “We've seen phenomenal fan support from every corner of the world. Weather Report had millions of fans over the years and it's a joy to see their reactions to this landmark initiative." Shorter added, “Taking myself out of it, this is a chance to find out something that happened because of a group of people who have gone down a trail less tread upon in the music world. I give the project a thumbs-up."

Since March 2013, nearly 100,000 new fans have joined the movement on Facebook and over 1000 fans have pre-committed to supporting as well as providing personal endorsements for the crowdfunding campaign. Endorsements can be found on the Legacy Project website at WeatherReportMusic.com. Peter Erskine added, “Weather Report is the closest thing that jazz had to the Beatles. The fans are still worldwide and hungry for the band's legacy."

The crowdfunding project will launch on indiegogo.com where fans can pledge for many rare incentives including a “Heavy Weather" Platinum Record, Jaco Pastorius tour memorabilia, VIP tickets to the 2014 Weather Report Legacy Tour, unreleased recordings from Joe Zawinul's personal collection of tapes, dinner with Wayne Shorter and Peter Erskine, and even a chance to be interviewed for the documentary.

For more information or interviews with the Legacy Project team, contact “Calm Before the Storm" producer Danny Kastner at [email protected] or 310-692-4960.