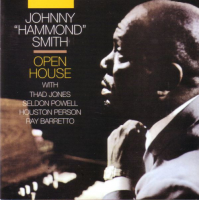 slideshow
Organist Johnny “Hammond" Smith was relentlessly tasty. Whenever I dig into one of his albums, my feet can't stop moving. Hi grooves and chord voicings were intoxicating. One of his finest albums from the first track to the last was Open House. Recorded for Riverside in 1963, the album featured Thad Jones (cnt,tp); Seldon Powell (ts,fl); Johnny “Hammond" Smith (org); Eddie McFadden (g); Bob Cranshaw (b); Leo Stevens (d) and Ray Barretto (cga).

Smith also was a wonderful composer. He wrote three of the album's tracks—Open House, Cyra and Blues for De-De. The rest are standards—I Remember You, Why Was I Born and I Love You, with Alex North's Theme from Cleopatra included.

Open House is an up-tempo blues, with solos by Powell, Smith and McFadden, a sterling Philadelphia guitarist whose comping behind Powell is exquisite.

Cyra is a beautiful ballad, with a cornet solo by Thad Jones.

I Remember You is an up-tempo swinger, and McFadden leads the way on guitar.

Theme From Cleopatra has a bossa nova beat and features Powell on flute. What a gorgeous player, as you'll recall from my post yesterday on the Billy Taylor Septet's Brazilian Beat.

Blues for De-De is a light blues march with wonderful chord voicings. Powell on tenor saxophone and Jones on trumpet play juicy unison lines and solos.

Why Was I Born opens with thick, dramatic organ chords by Smith and a solo by McFadden.

I Love You is taken at a peppy, mid-tempo tempo. Smith gets a terrific workout throughout and is joined midway through by Jones on muted trumpet.

Johnny “Hammond" Smith and Seldon Powell recorded together on two other albums—Look Out! and Black Coffee, both from 1962. They, too, are lovely albums.

Johnny “Hammond" Smith and Seldon Powell both died in 1997.

And here's I Remember You...