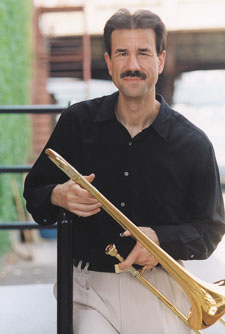 slideshow
The John Fedchock New York Big Band makes a special appearance at Iridium in NYC on Tuesday September 8, performing two sets at 8pm & 10pm. Made up of New York's jazz elite, the group is stocked with NYC's premier soloists featured in a variety of settings, including straight- ahead big band charts, as well as more progressive and innovative styles. The performance will showcase Fedchock's Grammy-nominated arranging, with material from all four of the band's outstanding CDs including it's latest release Up & Running, which spent eight weeks in national jazz radio's Top Ten, and had The New York Times applauding its “Cheerful Syncopation, Served With Spit-and-Polish Precision." A mix of fire and finesse, the John Fedchock New York Big Band combines restless innovation and a reverential approach to tradition, responding to every challenge with equal parts passion and poise.

Here's What The Critics Are Saying:

“Mainstream and modern at the same time." --Budd Kopman, ALL ABOUT JAZZ

“Fedchock is on his way to being accepted into the Hall Of Fame of Great Arrangers." --John Killoch, MAINLY BIG BANDS

“Fedchock's prowess as an arranger has proven a magnet for top-drawer talent." --Mark Holston, JAZZIZ

“...a group without gimmick, pretense or overt statement of purpose other than smart writing and great playing. It’s a real musicians’ band, stocked with highly respected veterans who welcome the chance to play some of their kind of music in a setting where everyone speaks the same language and gets a chance to shine." David French, JazzTimes

“Fedchock's arrangements are clearly a step above. You can hear the reflection and creativity from the opening notes of each composition." --Chris DiGirolamo, THE INSIDE CONNECTION