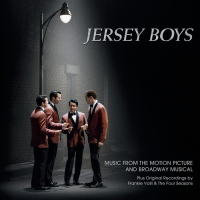 LOS ANGELES – To accompany director Clint Eastwood’s big-screen version of the Tony Award-winning musical Jersey Boys, Rhino will release the soundtrack to this highly anticipated film, which premieres on June 20 in theaters nationwide.

Jersey Boys tells the story of Tommy DeVito, Bob Gaudio, Nick Massi, and Frankie Valli, four young men from the wrong side of the tracks in New Jersey who came together to form the iconic 1960s rock group The Four Seasons. The story of their trials and triumphs are accompanied by the songs that influenced a generation, including “Sherry,” “Big Girls Don’t Cry,” “Walk Like a Man,” “Dawn,” “Rag Doll,” “Bye Bye Baby,” “Who Loves You,” and many more.

Relive those unforgettable songs with JERSEY BOYS: MUSIC FROM THE MOTION PICTURE AND BROADWAY MUSICAL, available June 24 for a suggested list price of $18.98 from Rhino. The album will be available digitally on the same day. Rhino also released the platinum-selling Original Broadway Cast Recording, which won the 2007 Grammy® Award for Best Musical Show Album.

While assembling the album’s 25 tracks, producer Gaudio carefully selected some of the best songs recorded by Frankie Valli & The Four Seasons and intertwined them with recordings by cast members from both the film and the stage musical. The soundtrack is full of surprises and makes a perfect audio companion for both new fans discovering the quartet though the film as well as long-time followers of The Four Seasons.

The soundtrack and movie will launch a busy summer for The Four Seasons. On July 1, Rhino will release three additional projects related to the group: features many of Valli’s classic solo albums in mini jackets with original artwork, $49.98. - Audio With A G: Sounds Of A Jersey Boy, The Music Of Bob Gaudio is a two- disc collection of legendary songs written by hitmaker Gaudio, performed by The Four Seasons and other artists, $19.98.

JERSEY BOYS: MUSIC FROM THE MOTION PICTURE AND BROADWAY MUSICAL

About the movie “Jersey Boys”

This film has been rated R for language throughout.